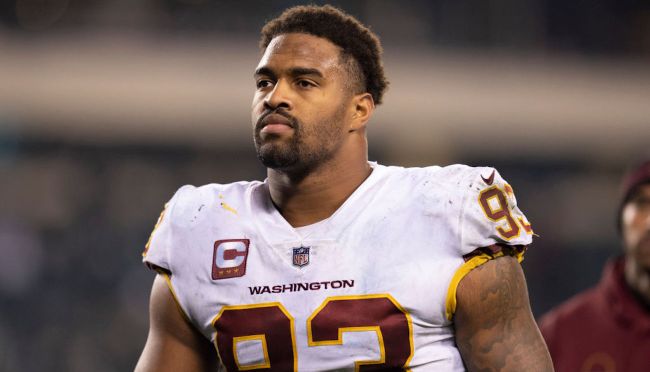 You ever say something aloud and then as soon as the sentence is complete, you think to yourself: “Man, I am a fucking idiot”? While I don’t know him, I imagine that a similar train of thought has run through the head of Washington Commanders defensive tackle Jonathan Allen in recent days.

In case you missed it, the 27-year-old Allen — who, to his credit, has been nominated for the Walter Payton Man of the Year Award for two straight years — asked his 68,000 Twitter followers to “Ask me anything” on Wednesday. In return, Allen got asked the relatively benign question of which three people, dead or alive, he’d like to have dinner with.

Well, Allen’s response was a bit problematic, to say the least, as he revealed the three guests at his ideal dinner party would be his Grandfather (reasonable!), Michael Jackson (not great!), and Adolf Hitler (objectively very bad!). Why Hitler, you might ask?

“He’s a military genius and I love military tactics but honestly I would want to pick his brain as to why he did what he did,” Allen said in a since-deleted tweet. “I’m also assuming that the people I’ve chosen have to answer all my questions honestly.”

Naturally, people were none too thrilled with Allen’s desire to have Hitler over for some meatloaf as Allen tweeted an apology just a few hours later, saying: “Early I tweeted something that probably hurt people and I apologize about what I said. I didn’t express properly what I was trying to say and I realize it was dumb!”

Allen also (unsuccessfully) attempted to further explain himself, reasoning that: “I probably should have used a different term but I was asked and I was giving my reason as to why I think it would be interesting to have a convo with him. He’s easily one if not the most evil persons to have ever lived but this was a hypothetical question.”

I’m sorry i offended you that definitely was not my attention, I was just answering a question.

Let this be a lesson to us all that Hitler should never, ever be the answer to *any* question. Well, maybe except if you’re asked who you would kill if you could go back in time.