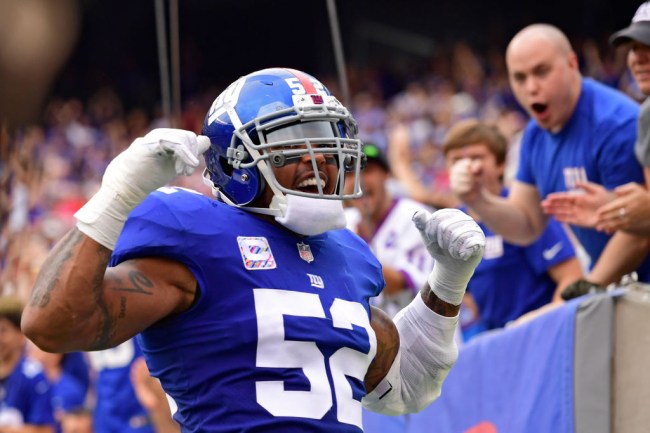 Jonathan Casillas is a linebacker with the New York Giants. He’s got 21 tackles on the season which I’m inclined to be impressed by given how god awful the G-Men are this season.

Jonathan Casillas hasn’t been grabbing headlines too much lately. The last time I can recall seeing his name in the news was when he got ‘randomly drug tested’ by the NFL the day after he posted a picture of himself smoking a cigar on Instagram (NFL = No Fun League). But, if this video is any indication the day-to-day life of Jonathan Casillas is about to get a lot more hectic because a lot of people have questions.

The footage shows Casillas exiting Harrah’s Casino in Atlantic City around 6am on May 12, 2012. Jonathan is clearly irate about something. He smashes a pot in the valet lobby before trying to re-enter the casino. That’s when he’s approached by several members of the Harrah’s security team. He tucks in his chain (as one does) and all hell breaks loose. It culminated with Jonathan Casillas being handcuffed and detained.

Why was this footage released now? Why wasn’t this a huge story back in 2012? TMZ Sports reached out to the Atlantic City PD to find out if there were ever criminal charges filed. They’ve also reached out to reps for Casillas. They haven’t heard back from either, but they are reporting that one ‘source connected to the incident’ said there was a civil suit filed.

Professional athletes are going to get the VIP treatment at every club/restaurant on the planet, but when it comes to casinos they still need to abide by the same rules as the rest of us. Casinos are printing money faster than they can cash it off suckers at the tables. They love wealthy celebs and athletes losing it all at the tables but I’d be SHOCKED if the fact that Casillas plays for the Giants is what did or didn’t lead to criminal charges here. It’ll be interesting to see how this story develops in the coming days.