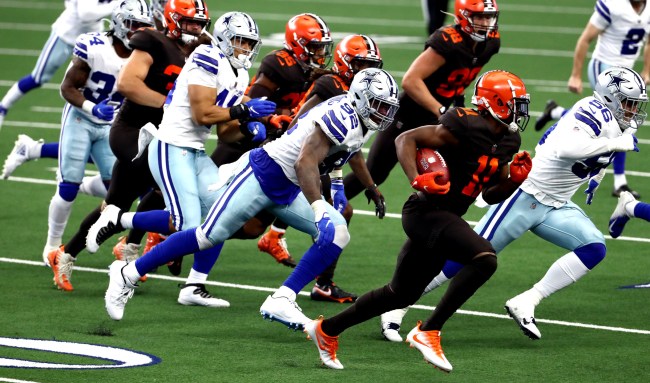 Despite the Dallas Cowboys getting off to a 0-4 start and allowing the most points in the NFL through four weeks – 36.5 points per game – they are still just one win (and a tie) out of first place in the pitiful NFC East.

In fact, Cowboys Executive Vice President Stephen Jones is still so optimistic that he said the team is really “not as far away as it seems.” (Fans disagreed.)

On Tuesday, Stephen’s dad Jerry Jones, made his weekly appearance on 105.3 The Fan and essentially echoed his son’s sentiments, even going so far as to say he still supports the Cowboys defensive coordinator Mike Nolan.

RIGHT NOW on @1053TheFan — Jerry Jones says he has no concerns about Mike Nolan’s job status, “ We got somebody here that can tell you where we’re ept and where we’re inept, where we need changes as well as anybody else on this planet” #DallasCowboys

Jones basically blamed the players for not trusting the new defensive scheme Nolan has implemented this season.

Another bit of news regarding the Cowboys defense that Lawrence isn’t going to like is what Cowboys great Troy Aikman said about it during his appearance on 96.7 The Ticket on Tuesday.

“To me, I’d be embarrassed as a player to put that kind of performance on film,” Aikman said about the Cowboys defensive performance in the team’s 49-38 loss to the Browns on Sunday. “That’s going to be seen by your peers for the rest of the season.”

“I just didn’t think the effort was there,” Aikman continued. “Over the years, you could always point to the way the Cowboys played defensively. They played with great effort and always flew around 11 guys. Didn’t always play great, but it was always there on film as far as the effort level.

“I didn’t see one guy on defense that I’d say had a good game. The last touchdown that Odell Beckham Jr. scored when they cut it to 3 points, [Dallas] had all the momentum. If they make a stop there defensively, they probably win the game.