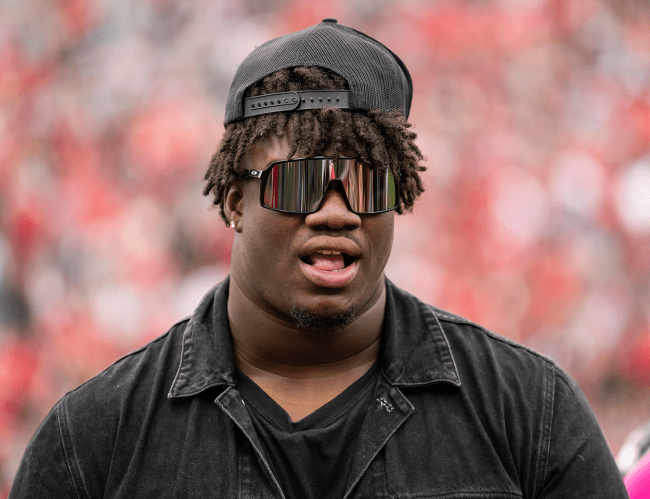 Jordan Davis had a monster season with the Georgia Bulldogs and now he is set to get a monster paycheck with the Eagles. He signed a four-year, fully guaranteed $17 million deal with Philadelphia after being drafted in the first round.

In addition to the compensation for his on-field play, the big defensive tackle has a (fairly) new endorsement deal with an incredible name. On the night prior to the NFL Draft, Davis announced his newest partnership.

He is teaming up with Barberitos, a Mission burrito-inspired restaurant based out of Athens. There are about 50 franchises in seven southeastern United States.

Not only is Davis a spokesperson — he has a burrito in his name. Well, kind of.

The ‘Heavy-D Burrito’ has a pretty hilarious undertone to its name, but it speaks to the sheer size of the 6-foot-6, 240-pound Davis. He’s a heavy human and his last name begins with D. Although it’s undeniably hard not to snicker at the alternative meaning.

As for what’s in the Heavy-D? Well it’s the standard Barberitos burrito, just doubled.

As for Davis’ thoughts about Barberitos’ Heavy-D burrito, he wishes those who attempt to chow down the best of luck.

“During my time as a Dawg in Athens, Barberitos was always one of my favorite places to eat,” Davis said. “Barb’s delicious, fresh and healthy food allows me to do my best on the field, while the restaurant gives back to the community with Burrito Love. I can’t wait for my friends and family to enjoy my Heavy-D burrito and wish the best of luck to anyone who can finish it.”

It seems like, maybe, just maybe, Davis and Barberitos could have come up with a name that has less connotation. Or, perhaps, it was intentional?

Either way — Davis is beloved by Bulldogs fans and is soon to become a fan favorite in Philly. Maybe the next step is a Heavy-D cheesesteak?