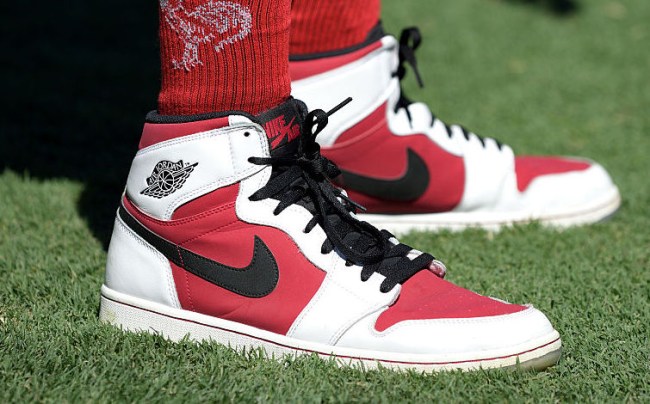 We live in the Golden Age of television, a time when a critically-acclaimed program debuts seemingly every single day as people scramble to figure out what they need to watch to stay in tune with the pop cultural zeitgeist.

I do what I can to keep up with what’s hot in the television streets but I always find myself sidetracked by the 37 episodes of Bar Rescue and the assortment of other entertainingly dumb shows I have on my DVR.

I’m an absolute sucker for any show that features people freaking out after realizing they stumbled upon a gold mine, whether they’ve stopped by Antiques Roadshow, hit up a pawn shop in Vegas, or yelled obnoxiously while bidding on a storage unit.

As a result, I was drawn to the story of Larry Awe, who discovered a single Air Jordan in a storage room in a Milwaukee mall he used to do maintenance for prior to its demolition 17 years ago.

According to USA Today, Awe came across the game-worn Jordan—which was signed by the superstar—that had previously been on display at a Playmakers until he saved it from the dumpster. It sat in his basement for almost two decades until his family started going through the collection of shoes he’d amassed in and realized they’d found a buried treasure.

The shoe in question is the legendary white, red, and black “banned” Air Jordan 1, which Jordan wore briefly during his inaugural season before switching to a different design. Chris Renat, who is overseeing the auction of the shoe, says it’s unparalleled as far as other Jordans are concerned.

“Larry’s had it in his basement for 17 years and it happens to be what I consider and what Heritage considers the most significant Air Jordan shoe in existence, and I don’t think we’re overexaggerating.”

The bidding for the shoe will start at $5,000 but it’s expected to fetch around $20,000 when everything is said and done. I can only hope that helps pay for the lawyers he’ll probably need when someone connected to the demolished mall decides to sue him for stealing what they believe is rightfully theirs.