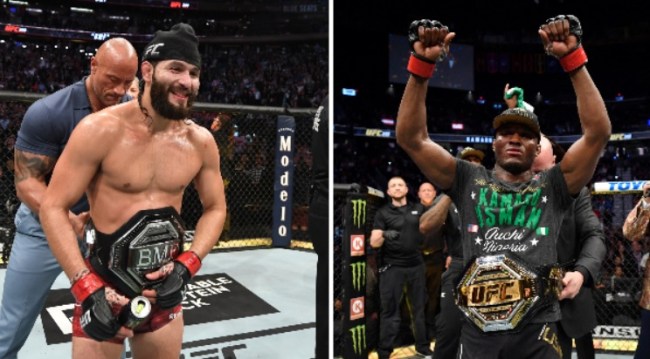 After months of heated trash talk BMF titleholder Jorge Masvidal appears that he will finally fight Kamaru Usman for the UFC welterweight championship after all.

After Gilbert Burns was forced out of his UFC 251 fight with Usman when he tested positive for Coronavirus the UFC quickly began negotiating with Masvidal to become his replacement and it according to ESPN’s Ariel Helwani it’s pretty much a done deal.

"Barring any last minute hiccups… people are very confident that, in exactly seven days from now, we're going to be seeing one of the most anticipated fights of 2020."@arielhelwani went on @SportsCenter to provide an update on @USMAN84kg and @GamebredFighter at #UFC251 pic.twitter.com/q1FFlXrzKU

This morning it seemed like a long shot that this fight would happen,” “Now, it seems barring any last minute hiccups … and there are still a few more hurdles that they have to jump over people are very confident that in exactly seven days from now people are going to see one of the most anticipated fights of 2020. A fight that we didn’t think is going to happen, now it seems like maybe the UFC’s most bitter feud is actually going to play out.”

According to Helwani the two fighters need to pass a few coronavirus tests before making their way to Fight Island.

“What hurdles? Well, just because a fight gets signed in 2020 doesn’t mean it’s happening. They’ll have to fly to Vegas in the next day or so, take a COVID test, quarantine, pass the test, fly to Abu Dhabi, take another test upon landing, pass that test, another test Friday, too.”

Update: The fight is officially going down.

Masvidal is entering UFC 251 on a three-fight win streak, his latest being a TKO victory over Nate Diaz at UFC 244.

Usman last fought in December at UFC 245 where he recorded a fifth-round TKO victory over Colby Covington.

UFC 251 is set to take place on Fight Island on Saturday July 11th.