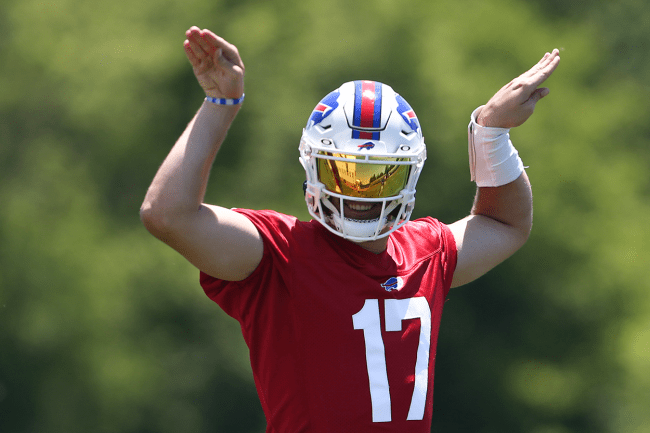 Saturday’s training camp session did not end on a high note for the Buffalo Bills. Josh Allen was not happy.

On the final play of Day 3, the 26-year-old quarterback and his offense set up for a goal line situation. He took the snap and faked the handoff but was immediately swarmed by the defense. Whether it was designed as an RPO or not, Allen had nowhere to go and kept the ball up the middle for a draw play.

It was blown dead almost immediately. However, before the play came to a complete stop, defensive tackle Jordan Phillips bumped Allen on his throwing shoulder.

Allen was pissed. He turned to Phillips and gave him a piece of his mind, which resulted in some serious pushing and shoving between both sides of the ball. It wasn’t a brawl, per say, but it was definitely a skirmish and the pile got rather big. It slid a good 15/20 yards before it was finally broken up and practice was declared over.

While Phillips shouldn’t have thumped Allen the way that he did, it was definitely not targeted or egregious. Allen seemed to overreact to the severity of the hit and ended up putting himself — and his arm — in more danger by engaging Phillips and starting the scuffle. There was more concern for Buffalo’s star quarterback in the pile than there was from the initial bump that started it all.

Fortunately, nothing more came from the dust up. Both sides separated peacefully. While the day ended on a low note (although sometimes training camp fights are a good thing), it’ll blow over by the next time that the Bills take the field.