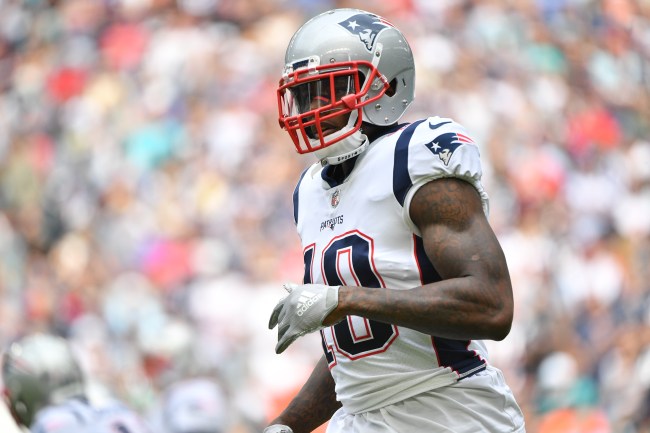 Josh Gordon made every Patriot fans’ pants a bit tighter last month after an Instagram post by Tom Brady revealed that the suspended wide receiver was catching balls from the legendary quarterback.

The 28-year-old has been training and rehabbing down in Florida with Olympic gold medalist Tim Montgomery during his indefinite suspension by the NFL, and if these new photos are any indication, Gordon is very serious about a potential return to the league.

While Gordon is looking more primed for competition than ever, he’s gotta be careful about his association with Tim Montgomery.

The 44-year-old is a former world record holder in the 100-meter dash–posting a time of 9.78 seconds in 2002–but since had all of his Olympic medals stripped after being found guilty of using PEDs amidst the BALCO scandal. He’s spent a huge chunk of his post-competition days behind bars after being convicted of participating in a check-fraud scheme and for dealing heroin in Virginia.

Gordon, who hauled in 68 catches for 720 yards and three touchdowns in just 11 games with New England last season, is still on the commissioner’s exempt list, so his future is still in the hands of the powers that be. Gordon will have to file for reinstatement before being allowed to play in the 2019 NFL season, and if a return is granted, defensive backs are fucked.