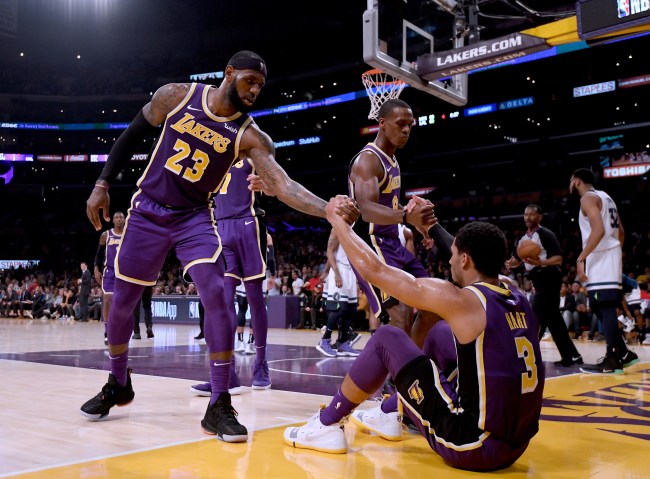 For those of you who’ve visited a Baltic country in the winter, I need not tell you how real seasonal depression can get. I visited Estonia in February and a local told me that they’ve received eight HOURS of sunlight all winter. And I won’t even get into the nagging rain because I’m fresh out of vitamin D pills.

The unpleasant weather combined with the people being much more stoic and reserved can be an adjustment for any red-blooded American, especially someone who is used to the comforts of sunny California.

During his appearance on the LightHarted Podcast with Josh Hart, Lonzo Ball opened up about his experience visiting his little brother LaMelo in Lithuania during Melo’s tumultuous tenure with Vytautas. Lets just say the Balls will not be on the Lithuanian tourist brochure.

“Lithuania was very depressing, I went there, too, to visit him,” he said. “I wouldn’t do it again. It’s, like, you been there? It’s, like, hella gloomy. Nobody smiles. It’s like everybody just hates that they’re there, I was like, ‘Damn, I have to get out of there, bro.'”

Josh Hart, who was shipped out of Los Angeles with Lonzo in the Anthony Davis deal, decided to get buzzed off a couple glasses of wine and take the opportunity to deliver a shot at the Lakers organization.

“It’s definitely not L.A.,” Ball replied back. “I’m not talking about the city,” Hart clarified. If it wasn’t already obvious what he was alluding to, Hart doubled down, saying, “I was gonna say the Lakers’ organization.” Lonzo, who didn’t want any smoke said, “I don’t know what he’s talking about.” [h/t Complex]

How about that dude say “We’re going to edit that part out so you might as well just tell us.” HA, NAHHHTTTT.

Hart tried to backtrack on Twitter, claiming he only had a problem with one person, but a drunk mind says sober thoughts.

Josh Hart tryna backtrack on IG now, saying he had a problem with only one person, not the organization as a whole 😂🙄🤡🤡 pic.twitter.com/ZHTRyIFmrx

Like clockwork, Lakers fans defended the organization’s honor on the social media battlegrounds.

Josh Hart bitter as hell. It’s ok, I’d be mad if they traded my ass too but all this passive aggressiveness and petty comments won’t make you a better basketball player. Stick to Fortnite lmao

If only Josh Hart worked on his game as much as he runs his mouth and played fortnite he might’ve been a half decent player and still in LA, shame, punk ass https://t.co/BEGM8ToZa2

Josh hart think he’s better than he actually is. Never seen the throw in piece of a trade be the most bitter of the bunch https://t.co/qUU6RCfQB1

If Hart had any stones, he’d call LeBron a little bitch on social media. FEED US THE DRAMA.