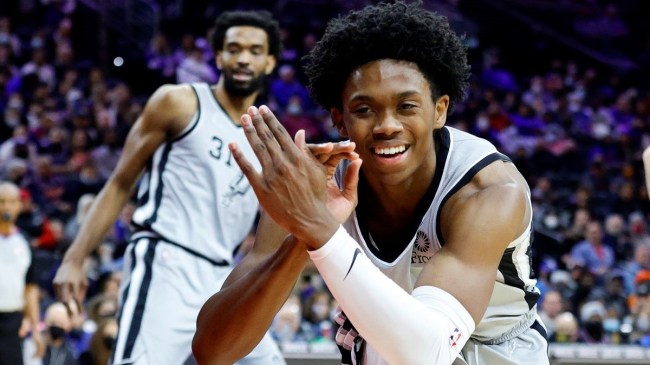 The San Antonio Spurs shocked the entire basketball world on Friday night when they announced, out of the blue, that they had waived second-year guard Josh Primo.

San Antonio selected Primo with the 12th pick in the 2021 NBA Draft and Primo was the youngest player selected in the entire draft. H.e had an up-and-down rookie season. But Primo looked like a promising player and absolutely nobody could’ve seen his release coming.

The stunning release led to a lot of speculation. Fans believed he had to have been involved in some trouble with the law or violated some sort of team policy. But neither the Spurs nor Gregg Popovich offered up an explanation.

Eventually, hours after the news of his release, Primo released a statement to the media. And the reason for his release was remarkably powerful.

Josh Primo statement to ESPN in the aftermath of his release from the Spurs tonight: pic.twitter.com/H1n3k3IIcn

“I know that you are all surprised by today’s announcement. I’ve been seeking help to deal with previous trauma I suffered and will now take this time to focus on my mental health treatment more fully. I hope to be to discuss these issues in the future so I can help others who have suffered in a similar way. I appreciate privacy at this time.”

Primo makes it clear in his statement that it was his decision to walk away from basketball at this time. While it’s obviously a big choice, the decision to forgo a shot at the NBA to better himself is an impressive one from a 19-year-old.

Many NBA fans commended him for his courage.

Missed this last night, but the Thunder did something very similar with Alex Abrines

Eventually, he got his self right and went on to play for FC Barcelona

It’s sad that people in these comments are questioning Primo’s decision to seek help for his mental health. He is 19. I suffer from depression on a daily basis.

Having the excessive stress of being an NBA player on my shoulders would not help. Stop stigmatizing and let him heal. https://t.co/yNTwgInVqe

I wish Josh Primo all the best. Hope he gets whatever help he needs. https://t.co/mzhi7pffCf

At just 19, hopefully Primo is able to get the help he needs off the court. Should he do so, it wouldn’t be surprising to see him back on an NBA court in the future if he so chooses.