J.R. Smith Arrived In A Bentley And Stepped On A Beehive During His Chaotic College Golf Debut 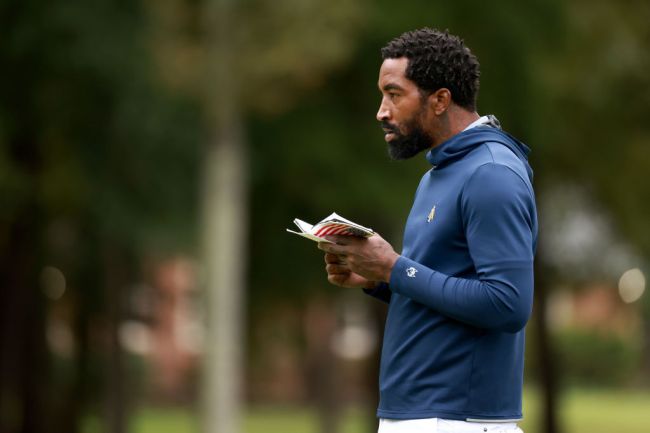 J.R. Smith’s college golf debut has been anything but typical. The 36-year-old, two-time NBA champion qualified for his first tournament by one stroke in practice over the weekend and played in the fifth spot for the North Carolina A&T Aggies this week.

Since then, he has showed up in a Bentley, made his first turn at one-over, stuck approach shots and hit a pair of birdie putts, but ultimately could not get anything going. For him to even be out there is noteworthy, and he is having a ton of fun while doing it.

JR Smith golfing should be our only sports news. pic.twitter.com/MxtCsHr9zr

The feat became even more impressive after Smith stepped on a beehive and continued to play on Day 2.

The Phoenix Invitational, hosted by Elon, was held on Monday and Tuesday at the par-71, 6,687-yard Alamance Country Club in Burlington, N.C. Smith’s first two rounds round were not great.

But he was not in last place after Day 1.

After playing 36 holes on Monday, Smith decided to use a push cart for his next and final 18.

In the final round of the Phoenix invitational @TheRealJRSmith is sporting a nice push cart for the next 18. @GolfDigest @RiggsBarstool @JeffEisenband @SportsCenter pic.twitter.com/HeOrejOS4A

Things got off to a par-par start on his first two holes, but Smith ran into some trouble on his third. The 6-foot-6, 220-pound freshman in college started on hole No. 10 and hit his ball into the woods on hole No. 12.

As he was looking for his ball, Smith stepped on a yellow jacket nest. He required medical attention for the stings/bites and had to come off of the course while he got fixed up.

.@TheRealJRSmith gets the medical cart called in after stepping on a bee hive while searching for his ball in the woods. Currently on the 12th hole and now letting other groups play through while he’s being evaluated. @GolfDigest @RiggsBarstool @SportsCenter @BleacherReport pic.twitter.com/IIqsAmfuOO

@TheRealJRSmith attacked by a whole nest of yellow jackets in first golf tournament. He has received treatment and resumed play. pic.twitter.com/U6lz5G6eAX

Smith did not let the incident stop him from continuing on with the round, but it definitely took a toll on his play. He double bogeyed No. 12 and was six-over through 11 holes.

That didn’t keep him from striping his tee shots.

NBA champion JR Smith (@TheRealJRSmith) tees off on Hole No. 1 at Alamance Country Club for the final round of the Elon Invitational. Smith is currently 5-over on the round, starting it on the back nine, now moving to the front nine. pic.twitter.com/aiRimkp1jN

Smith looks the part and is not necessarily going to finish dead last, which counts for something… Especially considering that he was STUNG BY WASPS mid-round.