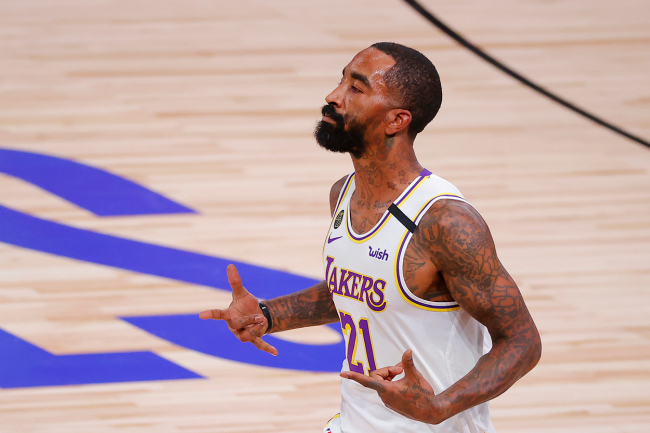 When the NBA decided to conclude its 2020 season within a bubbled environment because of COVID-19, the league also made a decision that led to exactly what was expected. NBA players got high.

Prior to the bubble, the league announced that there would not be any testing for recreational drugs. That has been the case for some time, but with the bubble, there was speculation that they might try to keep that at home. They did not.

Right when that decision was announced, it was clear that there was going to be a lot of bud burned in the bubble. NBA veteran turned cannabis advocate and businessman Al Harrington even put out a PSA to players to bring more weed than they thought they might need.

“Bring more than you think you’re going to need,” Harrington said. “You might have that teammate who’s never smoked and might want to try it since they’re stuck in a bubble. So you might be supplying other people.”

Now, two years later, J.R. Smith (who won an NBA Championship with the Lakers that year) confirmed what we already knew. Players were cooked.

In a recent interview with SHOWTIME’s ‘All the Smoke’ podcast, J.R. Smith discussed the cannabis usage in the bubble with Matt Barnes and Stephen Jackson.

Smith did not mince his words.

“Aw yeah— we was blowing it down in there,” he said.

While discussing the bubble, Smith said that he was thrilled with the decision.

“I’m glad it happened because it finally broke that barrier and that stigma that you couldn’t play and all of this, it was a drug, it was this and that,” he said. “When you go to the bubble basketball, some of the dudes was playing, it was like practice games, kind of situations, so some of them really can’t play that well in front of 30,000. But at this same time, you see some of the best level of basketball, you seen these dudes still doing what they was doing, kicking, killing.”

In addition, Smith gave a very definitive opinion of why he believes that the stigma against marijuana should not be as taboo as it is.

“So stop making it seem like it’s alcohol or something,” he said. “You know you ain’t out there playing drunk just getting 60 like that. That shit ain’t happening no more. But when you can be at peace with your mind, with your body, with your soul and you can go out there and just hoop, that’s all you want.”

You can find Smith’s full comments on cannabis in the the full interview here: