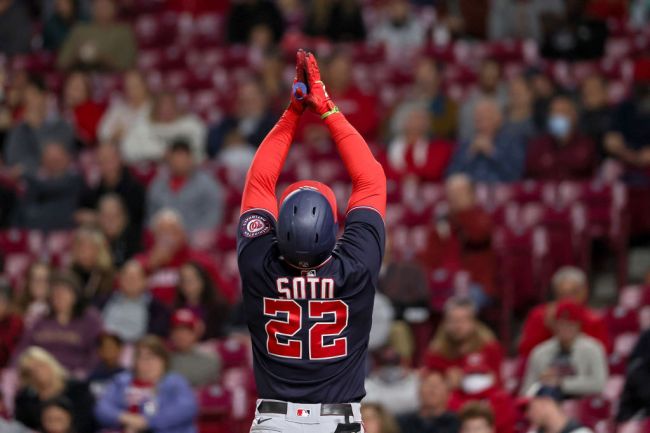 The 2021 Major League Baseball season is soon to come to a close and one of the brightest young stars in the league will be watching at home. Despite his team missing the playoffs for the second consecutive year, Juan Soto’s greatness cannot go under appreciated.

Washington’s franchise outfielder just finished his fourth season in the Bigs, and yet, he celebrated only his 23rd birthday on Monday.

Soto, who made $8.5 million in 2021, will have three more years of arbitration eligibility before he is expected to become the MLB’s first $500 million player. Should that be the case, every single penny would be well-deserved and this insane stat proves exactly why.

As NBC Sports Washington’s Matt Weyrich pointed out, Soto has 485 career hits, 98 home runs, 373 walks and 312 RBIs in 1612 at-bats. Here is full list of players in MLB history who have reached those totals before their 23rd birthday:

That’s it. Soto is literally in a league of his own.

To make things even crazier, he is batting over .300 in his career, on base more than 40% of the time, and carries a career .550 slugging percentage. And just for fun, he has stolen 32 bases.

He is insane and just keeps getting better. On the heels of what was arguably the most complete year of his career, Soto is among the finalists for the Silver Slugger Award, which he won in 2020.

The Nationals reportedly made a 10-year, $180 million offer to Soto nearly two years ago, but the two parties could not reach an agreement. As a result, Washington will likely need to hand their superstar 23-year-old a blank check in the coming years.