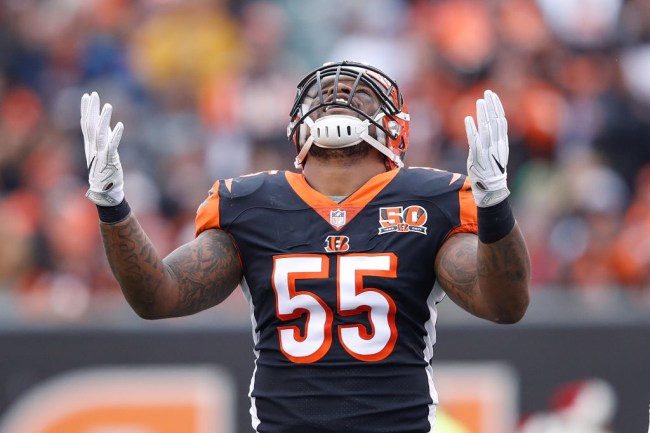 It didn’t take long for Bengals linebacker Vontaze Burfict to make negative headlines after being suspended for the first four games for a failed PED test. During the second half of Sunday’s last second loss to the Steelers, the 28-year-old delivered a forearm to the head of a defenseless Antonio Brown as he was being tackled to the ground, taking him out of the game temporarily for a concussion evaluation.

After the game, Ben Roethlisberger told Ron Cook of the Pittsburgh Post-Gazette that on the very next play, Burfict warned JuJu Smith-Schuster that he was next.

“He hits A.B., then, literally, as I am under center for the next play, he points at JuJu and says, ‘You’re next,’ ” Roethlisberger said. “How do you allow that stuff?”

“After I did the quarterback sneak that they called back, he got in my face. I said, ‘Hey, listen, it’s good to have you back out here [after Burfict’s four-game suspension to start the season].’ He got all feisty and wanted to fight.”

Lest we not forget the bad blood Burfict and JuJu have dating back to last December. During his rookie year, Smith-Schuster delivered a devastating crackback block on Burfict before standing over him and taunting him, resulting in a one game suspension and taking Burfict out of the game.

Smith-Schuster claimed that Burfict and a slew of Bengals players were threatening him throughout the entirety of the game.

“They were all making threats on me,” Smith-Schuster said. “Burfict was out there lying, saying I spit on him, which I didn’t …

“This was the most physical game I’ve been in. Their defense was coming after all of us. You could just see it with the talking, the pushing and shoving, the tackling, the extra stuff.”

JuJu’s response to the threats:

“Marching down the middle of the field, making plays, going down and winning the game.”

JuJu had three catches for 41 yards on the game-winning drive.