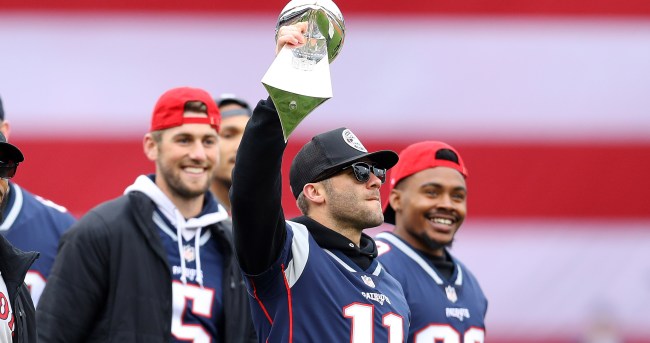 Because little brothers always like to follow in the footsteps of their big brothers, Julian Edelman, who Tom Brady refers to as his “little brother,” will be following up TB12’s Tom vs. Time with his own doc, 100%: Julian Edelman.

Edelman will not only be the subject of the documentary, he will also be co-writing and executive producing it.

All of which makes perfect sense because as everyone outside of New England knows, there are no bigger fans of Patriots players than the players themselves.

Showtime announced Monday it will air a new film on the Patriots receiver, titled 100%: Julian Edelman on June 28 at 9 p.m.

Showtime said in a statement that the film focuses on his underdog journey, with an emphasis on his recent seasons, which included winning the Super Bowl Most Valuable Player award in February after missing the previous season with a knee injury.

100%: Julian Edelman will be narrated by actor Michael Rapaport (because of course it will) and will feature conversations with Tom Brady, Mark Wahlberg, Snoop Dogg, Michael Strahan and Deion Sanders.

Here’s what to expect…

When injury and controversy threatened Julian Edelman’s NFL career, he returned to his father, an auto mechanic, to fix what was broken. 100% is an intimate behind the scenes look at the three-time Super Bowl Champion during a critical juncture in his life. After a dramatic victory in Super Bowl 51, Edelman suffered a devastating knee injury that forced him to miss the entirety of the 2017 season. The film joins Edelman as he attempts to overcome the challenge of a season ending surgery and PED suspension all while exposing the unorthodox origins that built him into one of the NFL’s most affable stars.

While Julian Edelman’s journey to Super Bowl MVP is acutely unique, sports fans everywhere will relate to his determination and his reliance on an inner circle of family and friends to overcome seemingly insurmountable odds,” said Stephen Espinoza, President, Sports and Event Programming, Showtime Networks Inc. “The access and timeliness of this project are the hallmarks of SHOWTIME Sports unscripted programming. We are proud to deliver the life story of one of America’s most popular athletes amidst a career-defining moment.

If you would have told me when I got hurt two years ago that 100% would be the result, I wouldn’t have believed you,” said Edelman. “SHOWTIME has been amazing. It turns out making movies is a lot of fun.

Showtime does know that Edelman isn’t as famous as Tom Brady, right? Not that it matters. Every single person in the Boston area will probably watch this movie so really, what does Showtime have to lose?