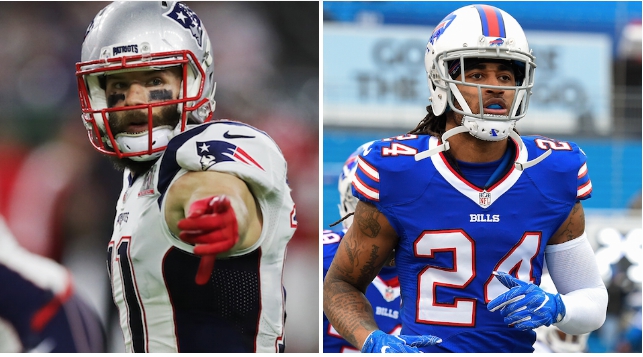 Julian Edelman and Patriots newcomer Stephon Gilmore wasted no time in breaking Bill Belichick’s hard-line rule of no fighting in practice after an 11-on-11 red zone drill turned testy on Tuesday morning.

According to Mike Reiss of ESPN, Edelman and Gilmore got tangled up in the back of the end zone after a pass from Jacoby Brissett to Edelman fell incomplete. Edelman allegedly took exception to the defensive back’s signature physical play and wrestled him to the ground before teammates and coaches separated them. By the end of the brouhaha, both players helmets had been ripped on.

Team caption Devin McCourty had this to say about the scuffle:

“That stuff happens and everyone knows Jules is a fiery guy. I think the biggest thing is those two positions compete all day — whether it’s individual release drills, 1-on-1s, 7-on-7 — it’s the same guys. I think the greatest thing about our team is that all that stuff happens on the field, it’s football, it never carries over to the locker room. We understand we’re out here to get better and those two guys will come back out here tomorrow and compete at a high level again.”

Linebacker David Harris, who’s spending his first year with the Pats after getting cut from the Jets, said that the two have let sleeping dogs lie.

“They are just trying to win, to compete every play, and once the next play starts it is forgotten about. They’re not holding any grudges, or anything like that. It is part of training camp — it’s hot, people are miserable, tired of going against each other. That’s part of the grind of training camp — every player on every team goes through it,” he said.

Patriots fans should feel very good about this much passion being displayed in early August.