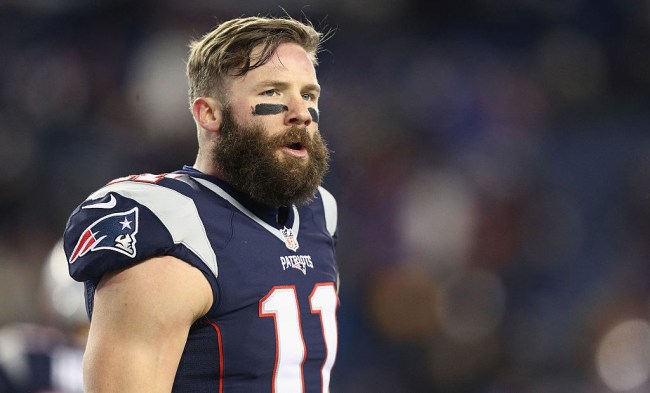 Last year, the New England Patriots encountered a bit of a setback when wide receiver Julian Edelman confirmed it’s kind of a dumb idea to have your starters play in preseason games when he tore his ACL in a pointless matchup against the Lions. Edelman was expected to be ready for the 2018 season, but it looks like they might run into another problem based on a report that one of Tom Brady’s favorite targets is facing a four-game suspension after testing positive for PEDs.

As is almost always the case, it’s unclear which substance Edelman tested positive for, but ESPN reports he’s appealing the suspension and using his (formerly) clean record to help plead his case:

The suspension is currently under appeal as Edelman has taken “hundreds of tests” and has not tested positive before, a source told ESPN.

If he were suspended for four games, Edelman would forfeit $470,588.20 in base salary. The Patriots’ first four games are against Houston, at Jacksonville, at Detroit and home against Miami.

NFL.com noted the impact this could have on the Patriots roster going forward, which currently has a glut of wideouts:

Edelman’s suspension thrusts even more questions about how Bill Belichick will shape the roster heading into the regular season. Heading into training camp, the Pats had a logjam at wideout with Edelman, Chris Hogan, Cordarrelle Patterson, Malcolm Mitchell, Kenny Britt, Phillip Dorsett, Jordan Matthews, Braxton Berrios and Cody Hollister all vying for snaps.