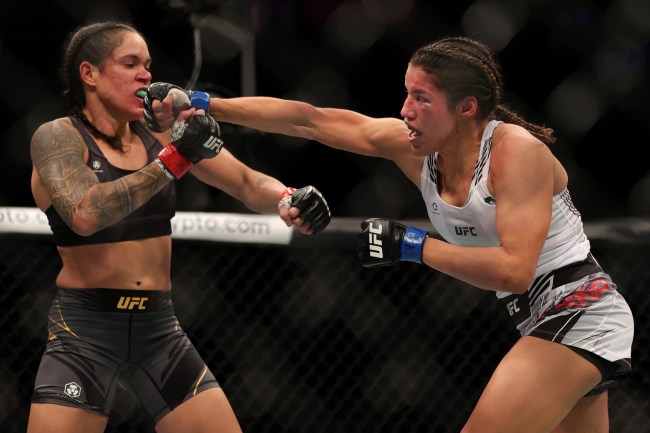 Wow. Just wow. There have been some shocking outcomes in the history of mixed martial arts, but I don’t think we’ve ever seen anything close to what we just got at UFC 269.

Julianna Peña just absolutely stunned the MMA world with a 2nd round submission win over Amanda Nunes. With Nunes entering the fight somewhere around a -1100 favorite, this has to be the biggest upset in UFC history.

The first round was not what anybody expected. We all knew that Julianna Peña would want to wrestle. I don’t think any of us were predicting Amanda Nunes to break out the wrestling shoes tonight.

In round 2, Nunes went with the gameplan we all expected. She came out swinging. The surprising part was that Peña actually got the bette of the striking. She eventually managed to wear Nunes down on the feet before shooting for a takedown of her own.

She got that takedown with little difficulty and quickly took Nunes’ back. It was game over from there as Peña slapped on a rear-naked choke and got the tap.

The loss brings an end to a dominant title reign from Amanda Nunes that saw her defend her bantamweight belt 5 times while also jumping up to featherweight for title fights. Nunes still retains that featherweight belt, but now she’ll have to go back to the drawing board at bantamweight.

Julianna Peña just won the biggest fight of her life and looked great doing it. She is now 11-4 in her career and just silenced every single doubter she had coming into the fight (myself included).

This win opens up a lot of possibilities for a bantamweight division that had grown stagnant thanks to Nunes’ dominance. Now there are plenty of fresh matchups or the possibility of a rematch between these two.

Regardless of what the next step is, Julianna Peña just made a massive statement to the MMA world.