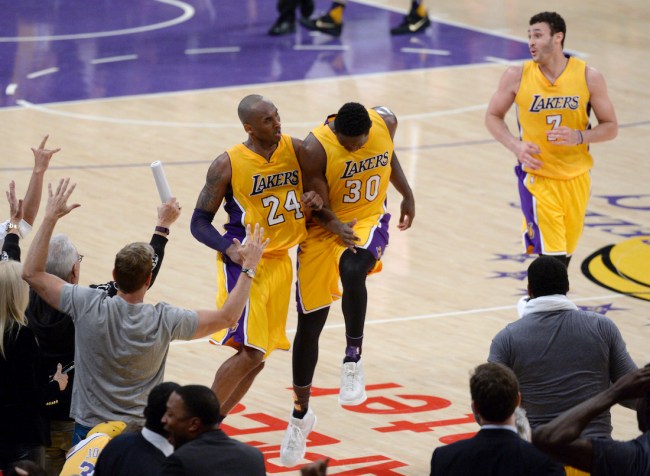 Former No. 7 overall pick Julius Randle is showing out this year, averaging career highs in a bunch of different statistical categories, while helping guide the New York Knicks back into playoff contention this NBA season. After failing to prove himself as a high lottery pick early in his career, it seems as if Randle is putting all his skills together and becoming a bonafide superstar — and he can thank Kobe Bryant for his resurgence.

After being chosen by the Los Angeles Lakers in the 2014 NBA Draft, Randle was Bryant’s teammate for two seasons. While the guy was just a rookie, he was able to learn something about Kobe Bryant’s work ethic that he’s starting to incorporate into his own routine, and, just maybe, help turn himself into a perennial MVP candidate.

During the Knicks-Lakers game Monday night, MSG’s Rebecca Haarlow shared an awesome story about how Kobe helped groom the young Julius Randle when they were teammates, with the Lakers legend providing the key to success in the league. Take a look below at the Black Mamba’s advice.

“It was Bryant who taught him that whenever you land in the next city for the next game, you hit the gym to put up shots before you go to the hotel no matter how late or how inconvenient that may be. It’s the game and it’s the work that comes first.”

“Last spring, not long after Bryant’s passing, Randle landed in Detroit. The Knicks found a local high school that agreed to stay open super late so Randle could get that work in. When he arrived, the athletic director at the high school was waiting for him and said ‘It’s good to see you. Guys don’t really show up here for that work anymore. Matter of fact, the last guy to come in and shoot late like this? It was Kobe.”

Now that’s pretty cool, man. Anytime anyone can be grouped together with Kobe Bryant, it’s a major compliment. When it includes duplicating Bryant’s work ethic — which was at an obsessive level — that’s even more humbling. So this had to feel good for Julius Randle to hear, because, as he’s proven on the hardwood for the New York Knicks this NBA season, Kobe’s piece of advice has helped him elevate his game to a whole new level. Just another example of why Bryant was an all-timer, because he outworked everyone to achieve success.