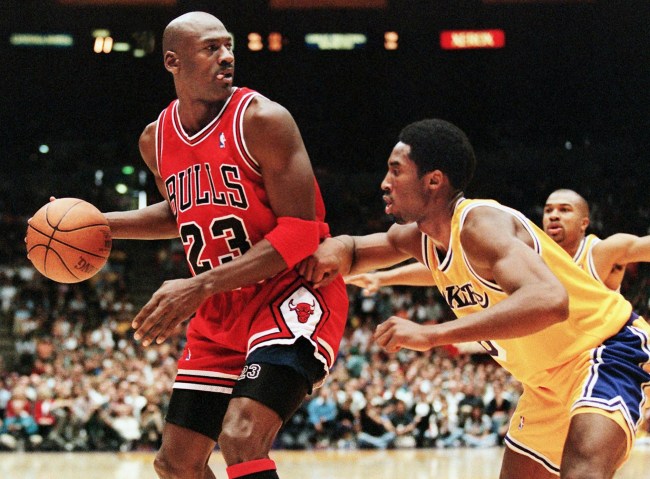 Kobe Bryant and Michael Jordan have often been compared as version A and version B of one another, with both sporting an absolutely insane work ethic that differentiated themselves from every one of their opponents. To hear the stories really makes one feel like they just aren’t doing enough with their lives, as both Kobe and MJ pushed themselves to limits that most people would never even think of.

As similar as Michael Jordan and Kobe Bryant are, one longtime NBA photographer, Andrew Bernstein, recently talked about one main difference between the two. Bernstein, who joined the John Roa Show to discuss the legacy of Bryant during “Kobe Day” — a celebration of the five-time champ on his birthday this past Sunday — also talked about both the similarities and the differences between two of the best ballers in NBA history.

Bernstein got his start shooting photos for the NBA at the 1983 All-Star game and recalls meeting Bryant when he was 17 years old. Over the course of his career he says he got to know Bryant pretty well and cited Tim Grover, a trainer for both Bryant and Jordan, for lighting on a key difference between the two players.

“They both worked out hard,” Bernstein said. “They both were religious workaholics in terms of their physical fitness and being in shape. The difference was that Michael didn’t care about the ‘why.’ Michael just wanted to get stronger, get bigger, and get in the best possible shape he could be.

“Kobe was relentless about asking about the ‘why.’ Like, ‘Why are we doing this exercise? Why are we working on these muscles?’ And that was really the difference between the two of them.”

It’s pretty interesting to hear Bernstein describe Kobe Bryant’s “why” as the main differentiator between Michael Jordan’s philosophy to put in work. Maybe it was because they were from two different eras — with MJ being fueled by hatred for teams like the Detroit Pistons on his way to winning six titles, whereas Kobe was fueled by trying to duplicate Jordan’s success as a pupil, making sure what he was doing was getting him closer to that level. Sadly, with Bryant’s tragic helicopter crash in January, we’ll never know the answer.

While it’s easy to compare athletes and different generations, there probably isn’t a more identical one than the Kobe Bryant-Michael Jordan one. Not only did they share the same drive and killer instinct, but they also respected one another because of it — which is why Jordan described Bryant as his “little brother” during Kobe’s memorial months ago.