Kobe Bryant Wanted To Play With Michael Jordan On The Wizards After Winning Three Titles In L.A. 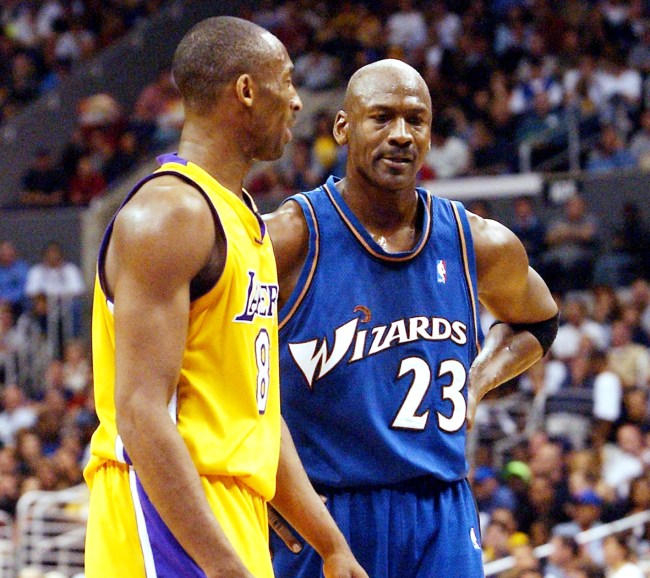 Here’s a new sports fantasy for you to ponder. Kobe Bryant and Michael Jordan playing on the same NBA team.

It almost happened too. In Washington.

After winning three NBA championships with the Lakers from 2000 to 2002, Bryant was famously getting fed up with teammate Shaquille O’Neal and his contract with Los Angeles was close to expiring.

Michael Jordan was just coming off his second season with the Wizards in comeback number two, so the opportunity was there… until then-Wizards owner Abe Pollin decided he was done with MJ and sent him off into retirement for good.

Too bad, because according to Michael Lee of the Washington Post, Kobe replied when asked about him possibly joining MJ in Washington, “That’s true. A long time ago? Yeah.”

…during the height of his feud with then-teammate Shaquille O’Neal in the early 2000s, Bryant wanted to be under Jordan in a different capacity. Bryant revealed recently he felt pushed to ponder a future away from the purple and gold banners after O’Neal — a three-time Finals MVP from 2000 to 2002 — went too far.

“The challenge had been thrown down upon me, of not being able to win without Shaq. A public challenge never really bothered me too much, but he made a couple of comments as well. I think he called me Penny Hardaway Part 2 or something like that. So that’s what [ticked] me off,” Bryant said. “Then it was like, ‘Listen, you know the step back that I took to help us win championships. Let’s not get [expletive] confused. I can dominate on my own. I decided to stay here and win championships and sacrifice MVPs and scoring titles and all that stuff.’ So once that was said, it was like a line in the sand now.”

Why on Earth would Kobe Bryant ever have wanted to leave Los Angeles and the tradition-rich, not to mention very successful, Lakers and go play with the Wizards and a past his prime Michael Jordan?

Bryant felt they offered what was important at the time: an opportunity to establish his own legacy and turn a moribund franchise into a champion. More importantly, Washington presented regular access to Jordan.

“I’ve always been very big on having mentors, on having muses and I’ve been really, really big on that,” Bryant said. “Being around guys who have done it before and done it at a high level and always tried to pick their brains and always tried to absorb knowledge. Obviously, being in that situation [with the Wizards], it would’ve helped having to be around him every day and so on.”

Calling Jordan a “championship-or-bust man,” Kobe said he believed he and MJ could have created something special in Washington.

“We would’ve put together a great team and we would’ve won championships,” Bryant said. “Listen, man. There are not a lot of players in this league that say, ‘Come hell or high water, we’re going to get this [expletive] done.’ People can look around and joke around about winning, saying they want to win. For me, it’s a matter of life or death. It was that important to me. And if it’s that important to me, I’m going to get there.”

Imagine the living hell practices would have been for the rest of the Wizards roster if Kobe Bryant and Michael Jordan had ended up teaming together.

Crazy what if story about how Kobe almost joined MJ on the Wizards. Full video: https://t.co/5pU4pjTonl pic.twitter.com/hhJ4nMcktj

It sure would have been fun from a fan’s standpoint though.