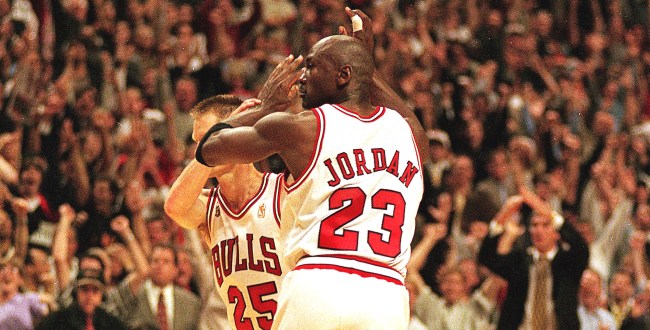 So are you hyped to watch The Last Dance about The GOAT Michael Jordan’s final season with the Chicago Bulls when it hits ESPN on April 19th? If you’re not, especially given our current circumstances, then I don’t even want to know you.

The buildup to the documentary miniseries has been taking place every since Jordan last laced them up for the Bulls in the 1997–98 championship season.

I say this because the world has changed so much since then with the internet and social media taking over everyone’s lives. Combine that with the seemingly unlimited number of legendary stories that have been told since His Airness finally called it quits in 2003.

Jordan’s teammates and opponents alike have no shortage of tales that would have certainly gone viral had their been social media back when MJ played.

One of those stories was told on Wednesday by one of Jordan’s former teammates on the Chicago Bulls, Steve Kerr.

Kerr had the best seat in the house from 1993 to 1999 when it comes to being able to file away classic Jordan stories and has not been shy about sharing them.

Appearing on The Dan Patrick Show, Kerr told another great story about how Michael Jordan would trash talk the hell out of his own teammates to get himself and the team ready to hit it hard when the playoffs began.

“He tested me,” Kerr shared with Patrick. “I think he tested everybody and I think that what you have to do is you have to stand up to him, and not necessarily physically, which, you know, I think basically he talked trash to me and I talked trash back. Which wasn’t, you know, highly advised at the time, but it was… I knew I had to stand up for myself. And I think that looking back and even at the time I could see what he was doing, you know?

“Michael wanted to make sure everybody who was out there could deal with the pressure of a playoff game and if you couldn’t deal with his trash talk during practice then he didn’t think you were going to stand up to the pressure during a playoff game. And it made sense. I mean, he brought the level of practice up to such a high level that it made us better as a team and those are the days when we actually scrimmaged every day.

“You know, we’ve gotten smarter these days. We don’t don’t practice as often, which saves the players bodies more, but back then we hadmore competition which may have honed our edge a little bit more too. So that was more the case back then and Michael took advantage of that for sure and it paid off I think for our team.”

Pretty easy to see why Jordan thinks that there will be a swath of people who will think he’s a “horrible guy” for being mean to teammates after watching The Last Dance.

Then again, there will also be a huge chunk of fans for whom seeing how fiercely competitive MJ was as an NBA player will only solidify him even further as The GOAT in their minds.