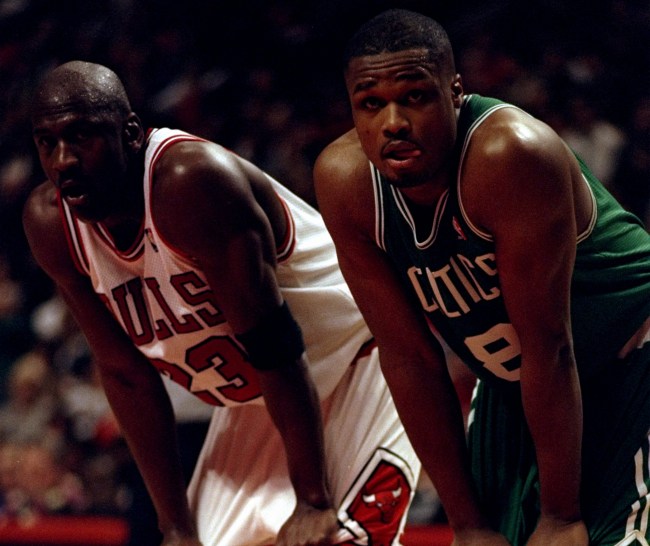 Michael Jordan takes so much pleasure in winning, it’s not even funny. From his early days on the basketball court to his insane competitiveness to things like a simple putt on a golf course, MJ’s ruthless demeanor is part of the reason why he’s the GOAT — because he always seems to get the best of other people, no matter what the situation.

Sure, it’s one thing to be talking shit on the hardwood to get in another player’s head — which we all know Michael Jordan was the king of — but it’s another thing to always be “on” with that type of killer mentality, with MJ looking for any reason to belittle another guy. Whether right or wrong, it was the Jordan way, and he was unapologetic for it.

One of those moments happened during the early-2000s when Jordan was playing for the Washington Wizards — and the poor soul of Antoine Walker was the victim of MJ’s wrath. That’s because, according to one of His Airness’ teammates at the time, Jared Jeffries, Walker tried flexing by showing up to a workout session in a Ferrari, only for Jordan to quash that feeing of, “oh, yeah, I drive a $250,000 car” in the best of ways.

Talking on the Wizards Talk podcast, just take a look at how Jeffries described the scene — which turned into an absolute shitshow for Antoine Walker.

“We were in Chicago at [trainer] Tim Grover’s gym. Antoine Walker pulls up in some Ferrari and he was like he just got it. M.J. was like ‘you know what? I’m gonna bring a different color Ferrari every day this week with a matching Jumpman jumpsuit.’ Bro, he pulled up in a Ferrari with a matching Jumpman jumpsuit for the whole five days we were playing. That’s the kind of swag he had,” Jeffries said.

Imagine one-upping someone’s brand new Ferrari with a fleet of Ferraris. Jordan had to win whether it was on the court or in life.

“Just his swagger that never goes anywhere. It’s the realest form of confidence that I’ve ever seen from a person,” Jeffries said.

Yep, that’s some big dick energy from Michael Jordan right there, isn’t it? The sheer cockiness and guile he had is absolutely insane, and probably left Walker feeling just a little bit defeated. Mike was like, “oh, you’ve got one Ferrari? I’ve got a few myself” — and preceded to drive a different one for the next week. Ruthless. Cunning. Lethal.

If there’s one thing we all know about Michael Jordan, it’s that he finds joy in beating other people. And, even if it wasn’t by dominating them on the basketball court, MJ would find unique ways to still totally fuck with someone’s head just for his own amusement.