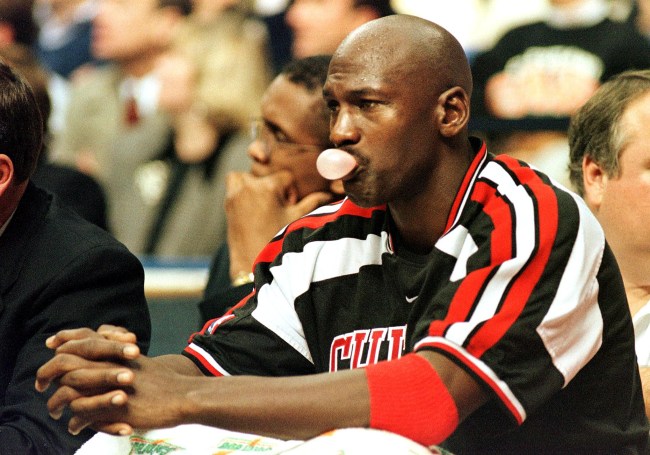 Steve Kerr’s two most memorable moments as an NBA player came alongside Michael Jordan while both were members of the Chicago Bulls. The first? Obviously, the game-winner that Kerr hit during Game 6 of the 1997 NBA Finals, were MJ got double-teamed, dished it off, and Kerr buried a 16-footer with a few seconds left. The second? The fight that took place between Kerr and Jordan during a practice, which is a hilarious story in and of itself.

While Michael Jordan may have pushed his teammates to the max — something he actually cried about while filming the upcoming documentary The Last Dance — there’s no question his commitment to winning had a serious impact on their mental strength during clutch times. It definitely wasn’t easy being Jordan’s teammate, but it sure as hell was worth it. Plus, imagine being on the opposite end and forced to guard the six-time NBA champ.

Well, before Steve Kerr and Jordan teamed up on the Bulls, the two played against one another; with Kerr starting his career with the Phoenix Suns in 1988, and then seeing more playing time with the Cleveland Cavs from 1989-92. It was on the Cavs where Kerr got his first taste of MJ, and, because of an injury, was forced to defend Jordan. As you might imagine, it didn’t end well for Kerr.

Describing the situation to Joe Vardon of The Athletic as being his “‘Michael Jordan World’ moment,” the current Warriors head coach recounted the entire thing — and, man, is it brutal.

“I think guarding him was the first time I actually met him,” Steve Kerr said, via Joe Vardon of The Athletic. “Craig Ehlo was injured (for the Cavs), so I started at the 2 in that game. I guarded Michael and he guarded me. Talk about the all-time mismatch physically. I was a buck-eighty.”

“I remember I made the first shot of the game with him on me, felt really good about that, and then six minutes into the game he hadn’t scored,” Steve Kerr narrated. “I was thinking, sitting there during a timeout, ‘Michael hasn’t even scored yet. I’m doing pretty well.’ I thought about it and I realized he hadn’t even taken a shot yet. He’s been passing to all his teammates. ‘Why hasn’t he shot yet?’ And then over the next four minutes he just torched me. Made like six straight shots and then Lenny Wilkens took me out. By the end of the game he had like 48, I finished with two. Just that first bucket of the game. That was my welcome to the ‘Michael Jordan World’ moment.”

Yep, that sounds just about right. Young player < Michael Jordan, who relished in the opportunity to embarrass opponents as much as possible.

Although Steve Kerr’s first live glimpse of Jordan went about as good as a pig in a slaughter house, at least he got smart and ended up joining forces with the GOAT on the Bulls, which led to three titles together. Hey, you know what they say: If you can’t beat ’em, join ’em.