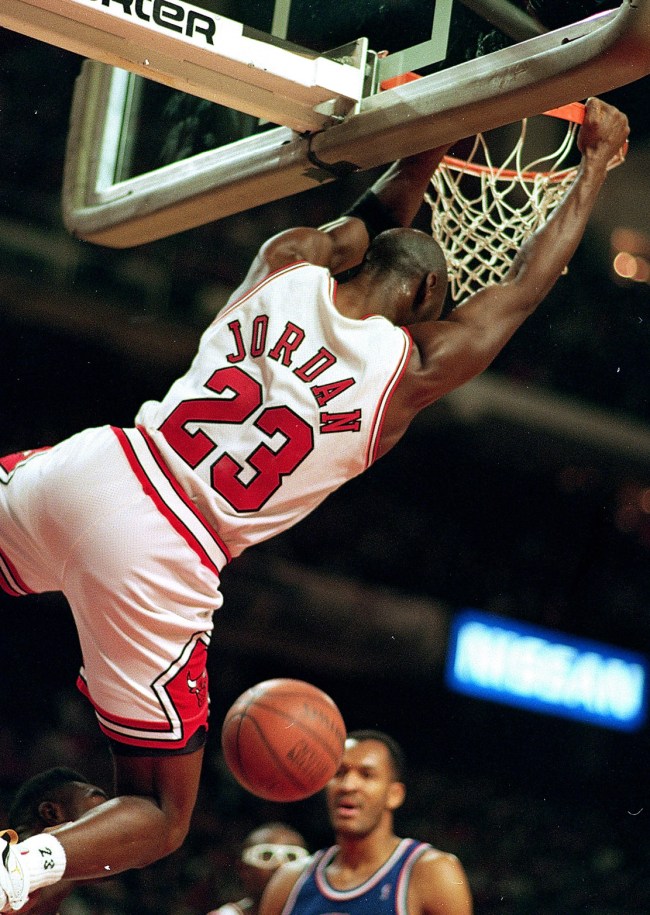 Back before he was his teammate on the Chicago Bulls, Golden State Warriors head coach Steve Kerr had the unenviable job of trying to guard Michael Jordan. It didn’t go well for him.

Early in his NBA career, while he was playing for the Cleveland Cavaliers, Kerr faced off against MJ and the Bulls. When USA TODAY Sports’ Jeff Zillgitt asked Kerr at the press conference the day before Game 1 of the NBA Finals about playing against Jordan. Kerr, who probably has a million MJ stories, revealed a first-hand account of just how difficult it was.

“He (Jordan) faked right, faked back left and went right, and I stayed right in front of him. But only because I went for the first fake,” Kerr explained. “We came to the bench and (head coach) Lenny Wilkens said, ‘You guys, did you see what Steve just did? He stayed in front. That’s what you have to do.’ I said, ‘That’s right, guys! Come on!’ I was literally still going for the first fake and he came right back to me, so that was my highlight.”

Steve Kerr shares a story of getting faked out while guarding Michael Jordan 😂😂😂 pic.twitter.com/U4GB4F8Rjg

Here’s what else Kerr, Curry, Durant, and LeBron also had to say at the presser…

.@StephenCurry30 on the narrative of not earning Finals MVP yet#NBAFinals pic.twitter.com/GNWlkUtlOt

"He's their Mr. Everything."

"We're not satisfied. We want to finish the job." – @KDTrey5#NBAFinals pic.twitter.com/HjqQkrT9Ot

KD on having @cavs vs. @warriors in the fourth straight #NBAFinals pic.twitter.com/Dv44haFJ8O

"I was in the league before I got here. I gained some experience over that time, if you don't know."

KD on how he learned to have a short memory in the NBA#NBAFinals pic.twitter.com/iKWTwJucJR

"If you want to see somebody else in the [Finals], then you gotta beat them."

LeBron weighs in on @cavs vs. @warriors for the fourth straight year in the #NBAFinals pic.twitter.com/vHKqQlVIM5

.@KingJames doesn't believe in having ceilings in a career. #NBAFinals pic.twitter.com/5I3qhxlRQ3

.@KingJames says the @warriors will have a "nice chapter" in a hypothetical book about his career. 📚#NBAFinals pic.twitter.com/AVDWiFr4Ed