Steve Kerr Says ‘You Were Scared To Death’ To Play With Michael Jordan, But Ultimately That Made Him A Better Player 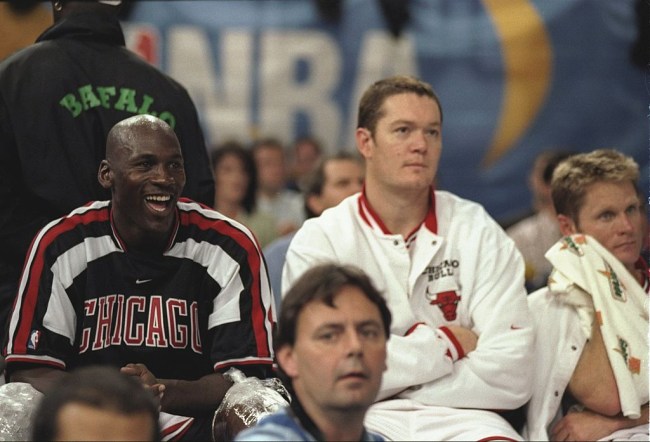 It’s a no brainer that Michael Jordan made every one of his teammates better players throughout the years, that’s just what happens when you get to play with the best to ever do it.

We don’t need to go back and harp on just how great and dominant Jordan was back in the day, but it is interesting to hear first-hand how it was playing alongside him in Chicago.

Steve Kerr joined Bill Simmons’ Book of Basketball podcast and broke down his experience playing with MJ and his leadership skills both in games and during practice.

“You were scared to death of him,” Kerr said. “He was the most dominant force on the floor in every regard. It wasn’t just the talent — it was the force of will. People, opponents were defeated by Michael before they even walked on the floor.”

Another interesting note he made was that playing with Tim Duncan was much easier than playing with Jordan. He mentioned that you felt you were playing with Duncan and for MJ. Kerr played in Chicago for five seasons, one of which was when Jordan decided to try his hand at baseball, then four seasons with the Spurs later in his career.

While mentioning that ‘you were scared to death’ to play with Jordan, Kerr said that translated, in the long run, to you not being scared on the court and in those big moments.

“He made me way better. Not only from the standpoint of the traditional ‘great player drawing attention,’ and ‘OK, they’re going to double-team him, I’m going to be open.’ That’s the easy explanation.”

“But it’s more than that. It’s don’t be scared. It’s like, you’ve got to compete. That’s probably the biggest thing I learned from him, watching him, was he was just so fearless. He never shied away from the stigma that would come through failure. He understood that if he just went all out every single game and went for it on every single play, the positives would outweigh the negatives, but you just to have to live with that failure.”

It’s fascinating to hear Kerr’s insight about playing Jordan. Kerr obviously understands the game better than most and has had major success both as a player and coach in the NBA and you have to think his time with Jordan played a huge role over all these years.