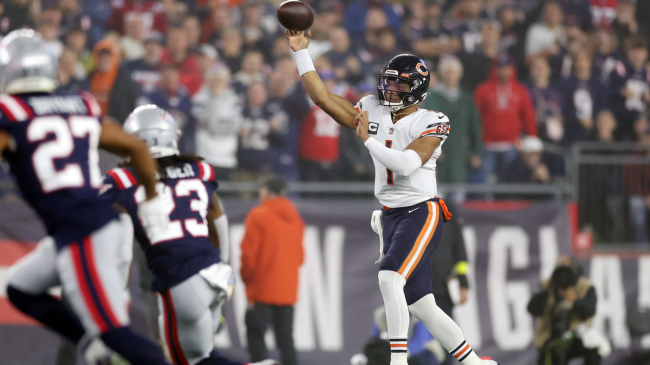 Justin Fields and the Chicago Bears played their best game of the season on MNF under the lights of Gillette Stadium. All eyes were on Bill Belichick and the Patriots as the head coach looked to surpass legendary Bears leader George Halas for second all-time on the NFL’s wins leaderboard.

Chicago had other plans, though.

The offense played lights out, racking up 33 points in its most decisive victory of the year. Entering as eight-point underdogs, the Bears surprised everyone. Most members of the media called for another classic Belichick defensive performance.

The Pats had no answer for Justin Fields, who entered the matchup as one of the least feared quarterbacks in the league. The former first-round pick ranked dead last in the NFL among starting QBs in passing, averaging less than 145 yards through the air. He’d had just one 200-yard game this year, compared to three where he threw for less than 125 yards.

But on Monday, none of that mattered.

The Bears finally tailored their offensive gameplan to accentuate Fields’ strengths. His athleticism and mobility. Rollouts and designed quarterback runs kept the New England defense on its toes the entire night. Fields was all but unstoppable in the surprising route.

When the final whistle sounded, Fields had tallied 179 yards through the air and another 83 on the ground. He threw one TD and scored another on the ground. Fans are hoping this is something that continues in the second half of the season.

After seeing the offensive changes and the command that Fields had on the offense, NFL fans raced to Twitter to post reactions.

Some were less than stunned to see Fields and the offense succeed when utilized correctly. ESPN’s Mina Kimes sarcastically wrote, “Justin Fields crushing it on designed rollouts and runs?!” accompanied by a *pretends to be shocked* graphic.

Justin Fields crushing it on designed rollouts and runs?! pic.twitter.com/aAf10fkoUt

Taylor Rooks shared that same sentiment, posting, “Justin Fields has the talent and the tools. (a couple overthrown passes but) Making the Bears offense actually fit around HIM can unlock a whole different QB for Chicago. It’s not there yet but it’s right there.”

Justin Fields has the talent and the tools. (a couple overthrown passes but) Making the Bears offense actually fit around HIM can unlock a whole different QB for Chicago. Its not there yet but it's riiiiiiiiight there

Robert Griffin III chimed in with his reaction, commenting, “The Bears are magically DOMINTATING after working their offense around what Justin Fields does well. I’ll be damned.”

The Bears are magically DOMINATING after working their offense around what Justin Fields does well. I’ll be damned.

Bears fans were excited for the win. They finally got the performance they were hoping for from their first-round draft pick.

this is the game i’ve been waiting for with justin fields.

went into foxboro and didn’t blink. so much talent.

Hopefully for Chicago supporters, this is a trend that continues in the Windy City.