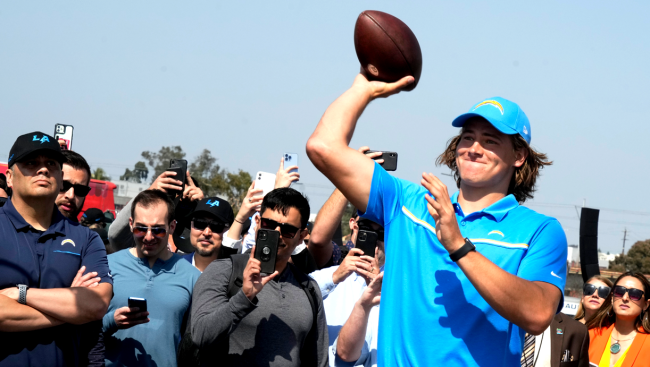 24-year-old Justin Herbert has quickly established himself as one of the best quarterbacks in the NFL. Just two seasons into his career, the Los Angeles Chargers QB has already passed for over 9,000 yards (5,014 in 2021) and 69 touchdowns (to just 25 interceptions).

He has also shown that he is not afraid to tuck it and run, gaining 536 yards running the ball at a 4.5 yards per carry clip and scoring 8 TDs.

Based on his appearance on Monday at the opening of Chargers minicamp, Herbert appears like he plans on doing even more damage on the ground.

Herbert was already gigantic for a quarterback at 6-foot-6 and 236 pounds when he showed up at the Scouting Combine in 2019. Now, however, the third-year QB is up to 245 pounds and it looks like most of that weight gain is muscle.

Herbert was asked about his beefier physique during a media session on Monday when a reporter said to him, “You’re looking a little swole there, whatcha been doing this offseason?”

Herbert replied with a grin, “Oh, I appreciate that. Just lifting, we’ve just been getting after it, and thankful to Jonathan Brooks, who’s been leading the charge.”

Brooks is the Chargers strength and conditioning coach.

NFL fans, especially those who root for the Los Angeles Chargers, were very excited to see what an even stronger Justin Herbert can do in year three of his NFL career.

“He is about to be unsackable,” one person wrote on Twitter.

“By 2024 he’s gonna be able to throw a football from SoFi to Allegiant good lord,” tweeted another fan.

“Justhick Herbert going to win me a championship,” wrote a optimistic Chargers fan.

Not surprisingly, the 24 year-old is also becoming very popular with the ladies.