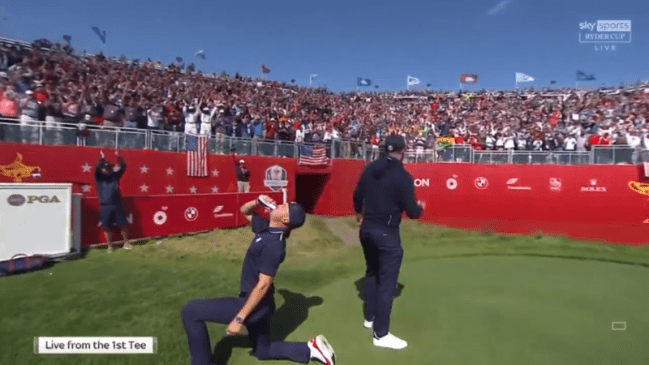 The Ryder Cup is the most exhilarating event in golf and it’s not even close. Between the raucous crowd, camaraderie amongst teammates, and ability to actually show emption on the course, it’s perfect.

Through the first day and a half of the 2020 (in 2021) Ryder Cup, the United States is rolling and they are FEELING IT. Going into the Saturday afternoon fourballs, the stars and stripes held a 9-3 lead over Europe.

Just before the afternoon action got underway at Whistling Straits, Justin Thomas and Daniel Berger decided to get the already rowdy American crowd even more fired up.

As they stepped up to the first tee, the duo threw some beers into the crowd.

They’re men of the people.

And then, as could be expected, a beer was tossed back from the stands and landed at their feet. Not long thereafter, a second was thrown in their direction.

The fans implored them to chug the brews and they obliged.

Both Berger and Thomas proceeded to pop the tabs and pump up the crowd before absolutely CRUSHING the beers with unmatched vigor. It was an unbelievably patriotic moment and JT spiked his can as the crowd continued to chant “USA! USA! USA!”

Justin Thomas and Daniel Berger tossed beers into crowd. A couple were thrown back and the U.S. golfers were implored to chug them. They complied with vigor. pic.twitter.com/wSYmZDQdjA

Justin Thomas and Daniel Berger just pounded beers on the first hole at the #RyderCup pic.twitter.com/WV2ThXl9zy

CHUG A BEER! CHUG A BEER! Justin Thomas obliges the fans at #1 tee before the afternoon session at the #RyderCup at Whistling Straits pic.twitter.com/0SdWT8oUD8

Neither Thomas nor Berger were set to appear in the afternoon session and thus, they could partake in the glorious moment. If your blood isn’t pumping with red, white and blue after watching the two American golfers house some brewskis, then you need to head to the nearest doctor immediately.