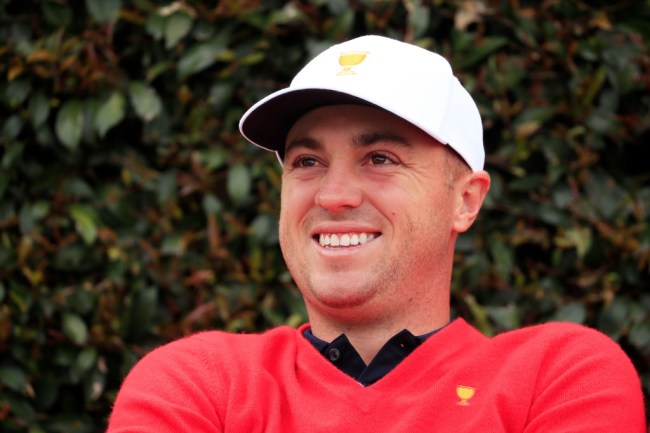 A lot went on during last week’s PGA Championship. Collin Morikawa hoisted the Wannamaker in just the second major start of his career. Young guns like Matthew Wolff and Scottie Scheffler were in serious contention down the stretch. Dustin Johnson finished T-2 giving him three runner-up finishes in his last five major appearances. TPC Harding Park flexed its muscle further solidifying the idea that more majors need to be played on munis.

We’re not here to talk about any of that, though, Justin Thomas, who finished T-37, said the word ‘fuck’ and Craig Dolch of USA Today decided to publish a near 800-word column explaining why he personally doesn’t approve of Thomas using that word.

Here’s a look at the clip that seems to have sent Dolch over the edge:

Apparently, professional golfers aren’t allowed to show frustration or talk like 99.9% of regular golfers do when something doesn’t go their way on the course.

Get a load of these words, again, published by USA Today. The typo of the word ‘know’ is their doing, not ours, and yes, he did actually pen the words ‘spit happens’:

“This is not the way the son (and grandson) of PGA Professionals should be acting on the course, and Thomas know it.

If this were a junior event in the South Florida PGA, Thomas would be warned after the first offense and removed from the course and suspended after the second offense.

Just about everybody heard his X-rated comment on ESPN, either live or on social media. Predictably, some had no problem with it because, hey, we’ve all been there on the golf course, having a rough moment.

Spit happens on a golf course. But there’s an easy cure.

Those who do, the stars who make $10 million-plus a year for playing a game, need to act and talk more responsibly.

We can hear you.”

Each and every one of these sentences is rich, but the “if this were a junior event in South Florida” bit probably takes the cake. According to our sources, the PGA Championship is not a South Florida PGA event, Justin Thomas is a grown man, and can both say and do whatever he wants to do on the golf course, and that includes saying the forbidden f dash dash dash word.

Do you know who else says the f-word while on the golf course and was caught saying multiple times during the PGA Championship? Tiger Woods.

I’m not going to sit here and say that Thomas screaming the word ‘fuck’ is something he should be doing. If Thomas could go back and not say curse words that get picked up by hot mics he would 100% do so, but he’s a human being that shows emotion by using certain words, just like the rest of us.

The fact that this story was even a thought, let alone published, is a prime example of how disconnected some in the media are to the actual pulse of the PGA Tour, especially its younger fans who drive engagement. It’s totally fine for people to have differing opinions, but the young wave of players on Tour and the younger fans will pass them by while they’re still complaining about things that don’t actually matter.

Thomas’ brand is what is today because he’s such an authentic guy. He’s likely not going to change his habits, even if those habits include saying the word fuck and being emotional on a golf course while competing for millions of dollars.

Thomas’ ‘incident’ at the PGA Championship didn’t hurt Thomas or his brand, in fact, it did the opposite. People enjoy seeing professional athletes, especially professional golfers, be authentic, not reserved.

Your remote has a mute button on it for a reason, if you’re worried about hearing a curse word on the broadcast, hit it.