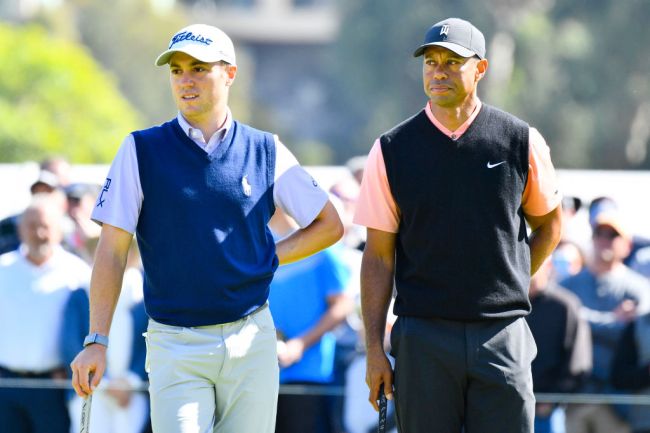 Tiger Woods will easily go down as one of the fiercest competitors not just in the golf world but sports in general have ever seen. Justin Thomas joined the ‘Sub Par’ golf podcast and dropped an absolute heater of a story about Woods prior to the 2016 Masters tournament that he was forced to withdraw from due to injury. When asked if Thomas reached out to Woods for help or advice in his golf game Thomas’ response was masterful.

“It’s interesting to see how when we first became as close as we did Tiger was hurt, and he was a lot more willing to help me and tell me stuff, and now it’s not quite the case,” Thomas explained. “I have to be smart about when I ask for advice. This week, next week he is not going to tell me anything. The first time I went over his house was I think maybe three years ago because he didn’t play the Masters that year and he hadn’t announced it, and wasn’t going to announce it until a couple days prior. So he is like ‘why don’t you come over we will chip and putt?'”

Thomas followed up by asking Woods if he would be playing in the following week’s Masters tournament to which Woods disclosed to Thomas that he would be withdrawing and asked him not to say anything.

“He was teaching me just so many shots around the greens and what holes I’m going to use it on, and how to hit different bunker shots, and why I can’t do this and that,” Thomas said. “I was like, man that was unbelievable. And then the next year I was like ‘hey let me know if you want to do some short game work this week.'”

Woods’ response was short and sweet, “I am playing this year, I will see you in Augusta.”

The wait is over. @JustinThomas34 tells @ColtKnost and @thesleezyman how @TigerWoods helped him prep for @TheMasters tournament and much more on this week’s Subpar.

That is about as cutthroat as it gets, as soon as Woods was back to full strength there was no way he was going to assist a young competitor like JT. The legend of Tiger continues to grow day after day, story after story, podcast after podcast.