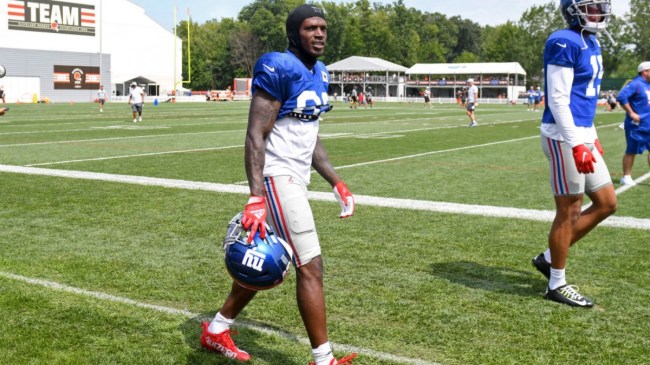 The New York Giants have made quite the investment at wide receiver over the past couple of years, but it seems like the receiver room is still a pretty big mess for the team.

Their huge investment in Kenny Golladay last offseason looked like a huge mistake throughout last season and the report that he looks like a mannequin running routes isn’t going to make Giants fans feel much better about his contract.

Now, on top of his poor play, it looks like he may have some beef with a fellow Giants receiver.

Of all the players on the New York Giants, there might not be one less qualified to call out Kenny Golladay than Kadarius Toney. Despite his awful first year in New York, Golladay still managed to outgain Toney.

Toney is also somebody that the fanbase and front office don’t seem particularly pleased with. There have been reports that the team tried to trade Toney during his rookie season. Those trade rumors persisted through the offseason. Toney has struggled to stay on the field and is currently not practicing for the team.

The team even seemed to draft his replacement this year when they selected Wan’Dale Robinson in round 2.

It looks like he has decided to use all of that time he isn’t practicing to start problems for the Giants.

The last thing the New York Giants need right now is beef between their wide receivers as their new coaching staff tries to fix their struggling quarterback and make the Giants offense functional again after some brutal recent seasons.

It looks like the reign of Dave Gettleman still had once last gift for the Giants.