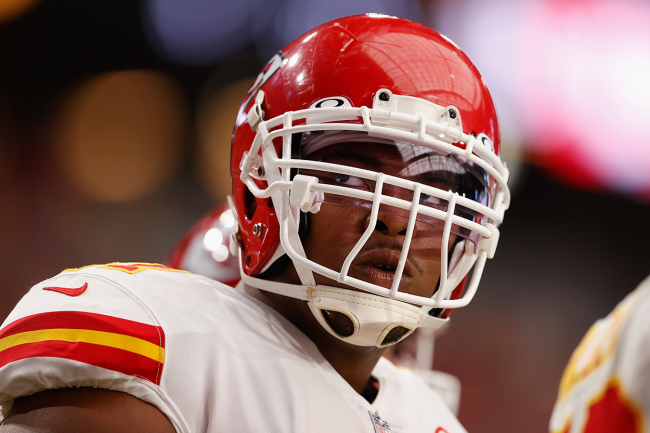 With the Chiefs set to open training camp next week, the team is reportedly “frustrated” with one offensive star. Offensive tackle Orlando Brown is not in Kansas City’s good graces at the moment.

During an appearance on NFL Now, NFL insider Jeffri Chadiha discussed how the 26-year-old lineman has left his organization disgruntled. It stems from his contract demands and quality of play.

Brown, who stands 6-foot-8, 345 pounds, was a third-round draft pick by the Ravens out of Oklahoma in 2018. Since then, he has reached three consecutive Pro Bowls since 2019 and has started 58 of his 64 games played.

However, the Chiefs do not believe that Orlando Brown Jr. is the best tackle in the league. The team thinks that he was asking for too much money and disagrees with his self-valuation.

“There was frustration and there was disappointment,” Chadiha said. “They really like Orlando Brown Jr., they love having him be a part of this team, but the money he was asking for was too high for them. They feel like they don’t want to not have stability at left tackle here, but they also don’t want to pay top-of-the-market money for a player that they don’t think is the best player at his position in the NFL.”

As a result of the disagreement on money, Brown is not expected to be at training camp this month and may not be on the field at all come Week 1.

“One front office person said, ‘This isn’t the same guy that we traded for,’” Chadiha continued. “The feeling there is that when they got him from Baltimore is that he was going to be a team player and work with them on a team-friendly type of deal. That was not the case. Right now we’re looking at a situation where Orlando Brown probably won’t be there for training camp and may not be there for Week 1.”

Here’s the official clip from the 12pm edition of NFL Now on NFL Network from Monday where Chadiha talks about Orlando Brown & the #Chiefs https://t.co/HgHBwCl8bQ pic.twitter.com/8mtLL4mM53

In turn, they offered him a five-year $91 million deal that included a $40 million sixth-year option that would have inflated the annual value but likely would not have been paid out. The standoff continues.