Kareem Abdul-Jabbar Wants Unvaccinated NBA Players Kicked Out Of League, Others Weigh In 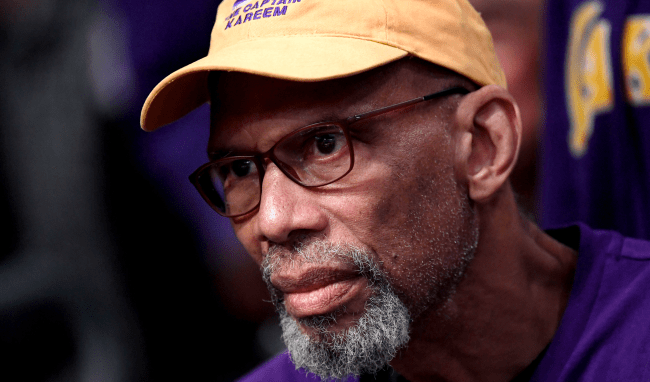 According to a recent ESPN article, roughly 85 percent of NBA players are vaccinated and the remaining 15 percent claim to have no plans to do so.

Players like Jonathon Issac and Bradley Beal say they don’t want to get the shot because they have already had COVID. Others, like Andrew Wiggins have tried, and failed, to get an exemption from the NBA. Wiggins says he is willing to sit out all of the Warriors’ home games (the San Francisco Department of Health requires vaccinations for large indoor events) and forfeit half his salary ($31.5 million) rather than get vaccinated.

Jonathan Isaac shares that he's had Covid in the past when answering a question on vaccine hesitancy. pic.twitter.com/acwqXgjhEA

Then there’s Kyrie Irving, who claims in the same breath that he wants to keep his vaccination status private while also saying he doesn’t want to be a distraction.

Related: Kyrie Irving Is A ‘Contrarian Without A Cause,’ Says Prominent NBA Player In The Wake Of Report He Could Miss All Home Games

For some NBA fans, like say, the league’s all time leading scorer, Hall of Fame center, Kareem Abdul-Jabbar, enough is enough.

“The NBA should insist that all players and staff are vaccinated or remove them from the team,” Abdul-Jabbar told Rolling Stone. “There is no room for players who are willing to risk the health and lives of their teammates, the staff and the fans simply because they are unable to grasp the seriousness of the situation or do the necessary research.

“What I find especially disingenuous about the vaccine deniers is their arrogance at disbelieving immunology and other medical experts. Yet, if their child was sick or they themselves needed emergency medical treatment, how quickly would they do exactly what those same experts told them to do?”

Bradley Beal is asked again about how he came to the personal decision not to get the COVID vaccine: "I’m still considering getting the vaccine, so one thing I want to make clear is that I’m not sitting up here advocating that you shouldn’t get the vaccine.”

“They are failing to live up to the responsibilities that come with celebrity. Athletes are under no obligation to be spokespersons for the government, but this is a matter of public health,” Abdul-Jabbar continued. “By not encouraging their people to get the vaccine, they’re contributing to these deaths. I’m also concerned about how this perpetuates the stereotype of dumb jocks who are unable to look at verified scientific evidence and reach a rational conclusion.”

Players like Steph Curry and LeBron James have also recently weighed in on the vaccination situation in the NBA.

Speaking to ClutchPoints about Wiggins’ status, Curry said, “At the end of the day, it is up to him. I think it’s no secret to that point. We obviously hope that he has all the right information and access to the right resources to ask all the questions he has on making decisions.”

LeBron, whose Lakers will be 100 percent vaccinated when the NBA season begins, told the media on Tuesday, “We’re talking about individuals’ bodies. We’re not talking about something that’s political, or racism, or police brutality. Things of that nature. We’re talking about people’s bodies and well being.

“So, I don’t feel like, for me personally, that I should get involved in what other people should do for their bodies and their livelihoods.”

Kareem Abdul-Jabbar also appeared with Don Lemon on CNN Monday night and said about the unvaccinated NBA players, “I don’t think that they are behaving like good teammates or good citizens. This is a war that we’re involved in. And masks and vaccines — they are the weapons that we use to fight this war.”

“We have to educate ourselves so that we understand what is being offered,” Abdul-Jabbar added. “These vaccines are safe and they are effective. And we have to fight this virus as a group. We can’t have certain people feeling, ‘Well, I don’t have to do that.’ That’s insanity.”