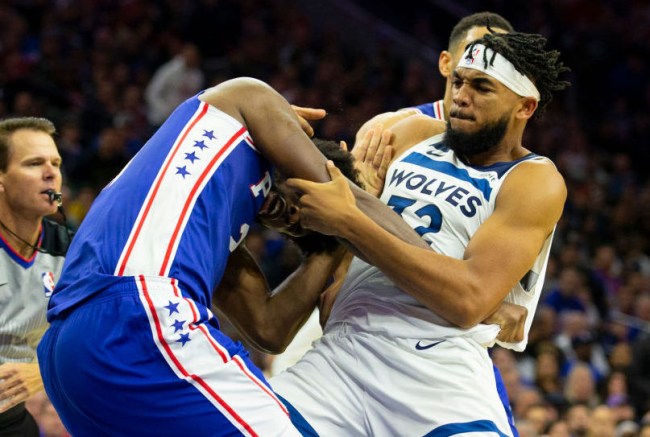 There was once a time when guys in the NBA settled their differences by absolutely wailing on each other (or, in the case of Ron Artest, throwing hands with fans in the stands).

However, that’s no longer really the case, as most on-court altercations involve both parties begging their teammates to hold them back in lieu of actually engaging in fisticuffs.

As a result, I’d like to give Karl-Anthony Towns and Joel Embiid some credit for actually engaging each other on Wednesday night (even if it was really just some intense hugging) when they found themselves in a shoving match and I’d like to give Ben Simmons even more credit for coming to the aid of his teammate by putting KAT in a chokehold.

Simmons really got KAT to tap out LMAO😭 pic.twitter.com/AUv1lR8u5X

Both Towns and Embiid were predictably tossed from the game and it’s safe to say KAT’s mom was not happy, as it looked like she wanted a piece of the 76er as he walked to the locker room.

KAT's mom wanted all the smoke with Embiid. 🤣🤣🤣 pic.twitter.com/KvjFO2dMLu

After the dust had settled, Embiid hopped on Twitter to fire a shot at Towns.

Great team win!!! I was raised around lions and a cat pulled on me tonight lmao.. Got his mama giving middle fingers left and right. That’s some SERIOUS REAL ESTATE #FightNight #IAintNoBitch pic.twitter.com/MWc9p0jy7u

However, Towns decided to respond in kind on Instagram, where he posted some pictures of the fight in addition to one of Embiid crying after the 76ers were defeated in the conference semifinals last year.

However, given all of the evidence at hand, I’d argue Towns took the L on the night, as it’s never a good look to get choked out only to have your mom come to your defense.

Sadly, we’re going to have to wait until the end of March until the two square off again and that day cannot come soon enough.