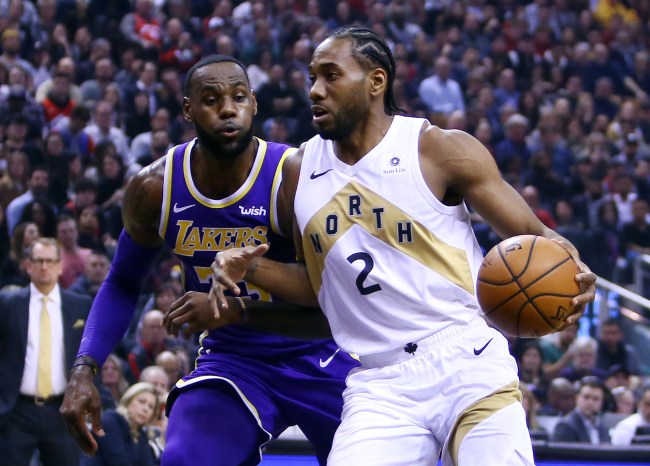 Kawhi Leonard is the biggest fish left in the NBA free agency pond. With blockbuster moves happening on the first day players could officially announce their decisions — with the biggest being Kevin Durant and Kyrie Irving teaming up on the Brooklyn Nets — Leonard is the prize any team would want. Of course, there are only a few franchises who are realistically vying for the two-time champ, with the Los Angeles Clippers, L.A. Lakers and Toronto Raptors being the favorites.

While the Raptors and Clippers have been linked most to Kawhi Leonard over the past year or so, with the Lakers going out and trading for Anthony Davis a couple weeks ago, it seems to have opened up the serious possibility of Kawhi joining the purple and gold, which would be an insane Big 3. Who knows if it all comes to fruition, but in order to make it happen, it sure sounds as if Leonard needs some demands met first.

That’s because, during an appearance on Spectrum Sportsnet, Broderick Turner of The L.A. Times talked about some of the details that he heard came from a free agent meeting between Leonard and Lakers great and former team executive Magic Johnson. Here’s what Turner had to say.

“The first thing that I’ll start with is that Kawhi and his uncle, Uncle Dennis, they talked to Magic several times.”

“There was one interesting question (Leonard) had for Magic: ‘Did you guys try to trade for me when I was in San Antonio?’ And the answer was ‘yes, but because it was Gregg Popovich and the San Antonio Spurs, and our history, they were asking for 2,000 draft picks — well, not 2,000 — like four draft picks, first-round draft picks, and we just couldn’t do that.’ And that was one of his questions.

“The uncle’s questions were ‘what’s really going on in the organization between you, Jeanie, Rob Pelinka, everyone? Is it as dysfunctional as we’re reading and hearing?’ And the response was ‘we had some issues, but we’re past that. I’m past that. We’re still a family, such as you fight with your brothers and sisters sometimes, well, I had somewhat of a disagreement with my sister. And Rob Pelinka, yes, I said he was a back-stabber, but that happened then. Now I want the Lakers to be a championship team. Having Kawhi here would do that.

“‘You can play for them because it’s not about me, it’s not about Jeanie, it’s really about this franchise. It’s about Kareem. Wilt Chamberlain. Kobe Bryant. It’s about all those great players. You can be another one, you can join LeBron James and you can win more titles, and you don’t have to put as much stress on your body to do that. We have two stars to work with you.’”

Considering Magic Johnson abruptly resigned on the last day of the regular season — doing so without telling Jeanie Buss — and given all the other drama that’s happened since the franchise added LeBron James last summer, Leonard’s uncle had some good points he needed covered. But another main thing the superstar allegedly wanted was the ability to bring on his own medical people, who helped Kawhi Leonard manage his regular season minutes last season to stay fresh for a playoff run that led to a title.

“LeBron James was able to bring on his own trainer, his own medical people. (Kawhi) wants to know if he can do that as well. LeBron James brought on some people that weren’t with the Lakers, and he wants to know ‘can I bring with a couple of my guys?’ … And as far as I know, the Lakers would be willing to do that, because you do those things for superstar players.”

The Kawhi Leonard sweepstakes is at an all-time high right now, and, should the Lakers meet some of the demands he reportedly requested to Magic, given two other superstars are in place now with James and Davis, we could see the greatest trio in NBA history formed. If that were to happen, it would be a full 180 from how bad the Lakers looked about a month ago, which is insane to imagine.