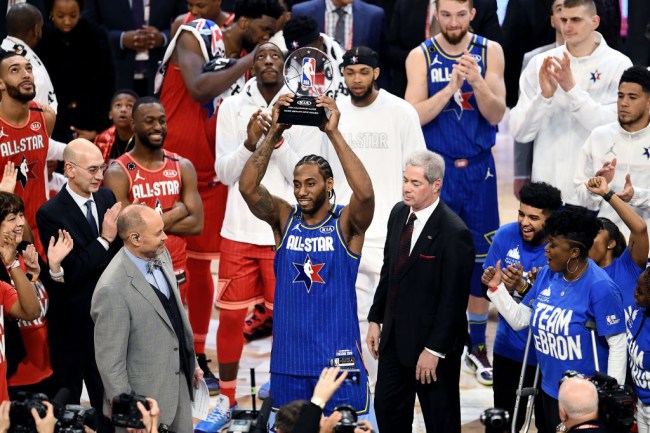 Kawhi Leonard took home MVP at the NBA All-Star Game on Sunday night after leading all scorers with 30 points to go along with seven rebounds and four assists. It was a special moment as he became the first player to ever win the Kobe Bryant MVP award as the award was named after Bryant following his death on January 26.

After the game, Leonard joined the NBA Inside guys on TNT and shared a story about Bryant. The two superstars were friends and likely shared many memorable moments on and off the court, but this particular one clearly stands out to Leonard.

Leonard got a good chuckle in after telling the story, too.

Kawhi talks about Kobe’s competitiveness with the Inside Guys. pic.twitter.com/2VrsMKR2jk

The story is a great representation of Bryant’s competitiveness and all-time green light when it came to putting up shots in a game, but I wouldn’t necessarily say it’s a ‘funny story’ as much as it is just a straight-up, typical Bryant story showing just how competitive the man was.

The fact that Kawhi told the story in Kawhi-like fashion makes it even that much more special. It’s not particularly interesting or wild, just a random funny story to Leonard.

Team LeBron, who Leonard was a starter on, went on to win Sunday’s game by a count of 157-155 after Anthony Davis scored the game-winning point at the free-throw line.