This Kayaker Paddling Off A 134-Foot Waterfall Has Stones The Size Of Mt. Rushmore 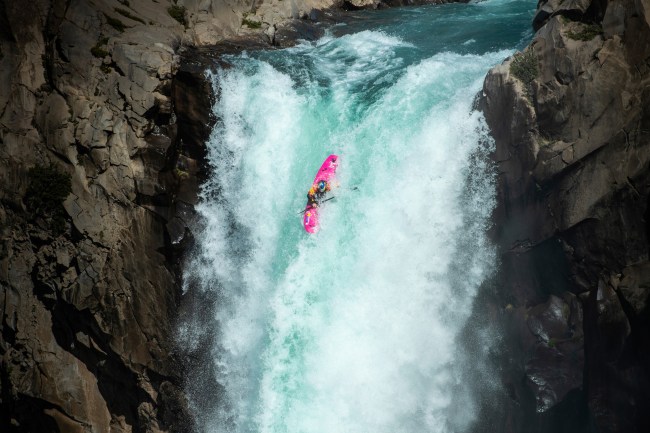 Dane Jackson is a GoPro athlete who earlier in this year bombed down the second tallest waterfall descent ever recorded by a kayaker. This went down on Chile’s Salto del Maule and it was a feat which took four years to accomplish.

Footage of his descent has been coming out for months with different angles and cuts of the wild plunge. One thing blows my mind about this waterfall drop is how he practically becomes a part of the waterfall for a few seconds during the drop because he’s falling for so long. He gets swept along in the plunging water and loses complete control.

Imagine the sense of impending doom as you paddle over the edge, after months/weeks/days/hours/minutes of overthinking the stunt. Then you finally make it over that edge and realize you’re completely out of control. Falling and falling. Still falling. In the middle of nowhere. Sure, it all happened in the matter of a few seconds but that must have felt like a lifetime.

Here, Dane Jackson takes us through what it was like to paddle over that waterfall and what his goal was with this drop. Hearing his perspective on this wild waterfall descent adds a whole extra element to this footage.:

I mentioned before that he’s a GoPro athlete. Here’s his helmet camera footage from back in February when this went down during Chile’s Summer. This gives you a completely new perspective on this drop:

I think it’s safe to say that this guy’s fight-or-flight fear response doesn’t operate like mine.

For more on his Salto del Maule waterfall drop earlier this year you can click here to read his RedBull interview on what led up to this and what it was like.