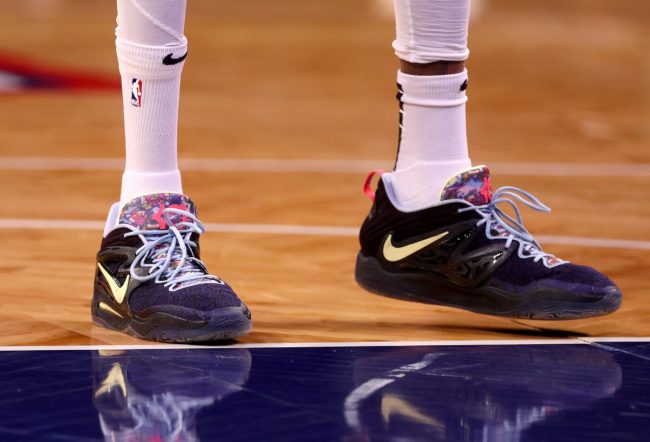 KD caught the most random of strays in a recent episode of “Hard Knocks” while a strength coach was discussing workout regimens. The hilariously unnecessary comment is now going viral in a clip on social media.

This year, the NFL series is following the Detroit Lions through their camp and preseason portion of the year. In the video, the strength and conditioning coach is heard discussing his role within the team, and how he’s helping prepare his players for the upcoming year.

But while talking about how the Lions are working in the weight room, the trainer dropped the most random, unnecessary, and hilarious quip about the NBA star.

“Coaches will always ask me, ‘How do you do that?’ I’m like, ‘Dude, I’m tired of explaining it to you.’ You’ve got to treat your whole body. Kevin Durant and these guys, who messed their achilles up. I have a question for guys like Kevin Durant. When’s the last time you did a calf raise?”

For this trainer to just single KD out about his workout routine was too much, and fans were quick to react to the quote on social media.

After hearing the hilarious comment, many fans on Twitter chimed in with their reactions. They couldn’t help but laugh as the trainer seemingly brought up KD’s workout regimen out of nowhere. Some questioned whether doing calf raises would’ve even prevented his achilles injury in the first place.

This is the greatest fake question ever posed. "When's the last time you did a calf raise?"

When was the last time you did a calf raise ?? LMFAOOOOOOOO 💀💀💀

Many wondered what KD’s reaction was upon seeing the clip. He’s never been one to hold back on social media.

KD when he open his phone pic.twitter.com/4EssVh05Om

Maybe this trainer practiced this line after finding out he’d be in the “Hard Knocks” special.

Dude had this written on his fridge all week. Respect it.

Whatever the case, it led to a laugh out loud quote.