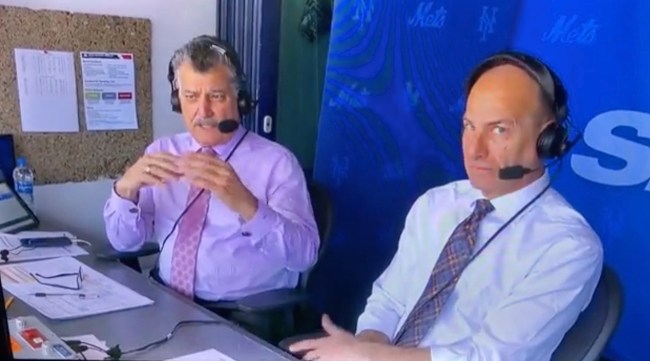 One of the great pleasures of my New York Mets (finally) being good this year is that I’ve been able to watch more games late in the season, and therefore, not only get to enjoy my team on the field when it matters most, but spend more “time” with the broadcast booth of Gary Cohen, Ron Darling, and Keith Hernandez.

Widely considered to be the best broadcast booth in Major League Baseball — at least according to 6,200 readers of The Athletic who participated in the publication’s 2020 survey — the combination of information, wit, and humor that the SNY trio provide is virtually unmatched, because not only are Darling and Hernandez considered Mets legends but play-by-play man Gary Cohen has been a lifelong fan of the team.

The trio’s greatest attribute, by far, is their comedic chemistry, as evidenced by Keith Hernandez pulling a Shakespeare reference seemingly out of his ass during Monday night’s game against the Cubs, leaving his booth partner Gary Cohen stunned given the usual content that comes out of Keith’s mouth. This year alone, for example, we’ve written about Keith shouting out his ex-wife, mocking the Phillies (while the Mets weren’t even playing the Phillies), and almost falling for a “Nigerian Prince” email scam.

So, you could imagine how surprised both Gary Cohen and all Mets fans were when Hernandez suddenly made reference to one of the greatest authors to ever live following an error by Cubs infielder Patrick Wisdom.

“Hamlet at third!” Hernandez said after the error.

“To throw, or not to throw? What do you wanna do?” chimed in Cohen.

"That was Hamlet at third!"

While the Mets may have lost to the Cubs on Monday, the Atlanta Braves also lost to the San Francisco Giants, meaning the Metropolitans maintain their 1.5-game lead in the NL East with 20 games left to play this season. Buckle down, New York, it’s crunch time. This city needs postseason baseball.