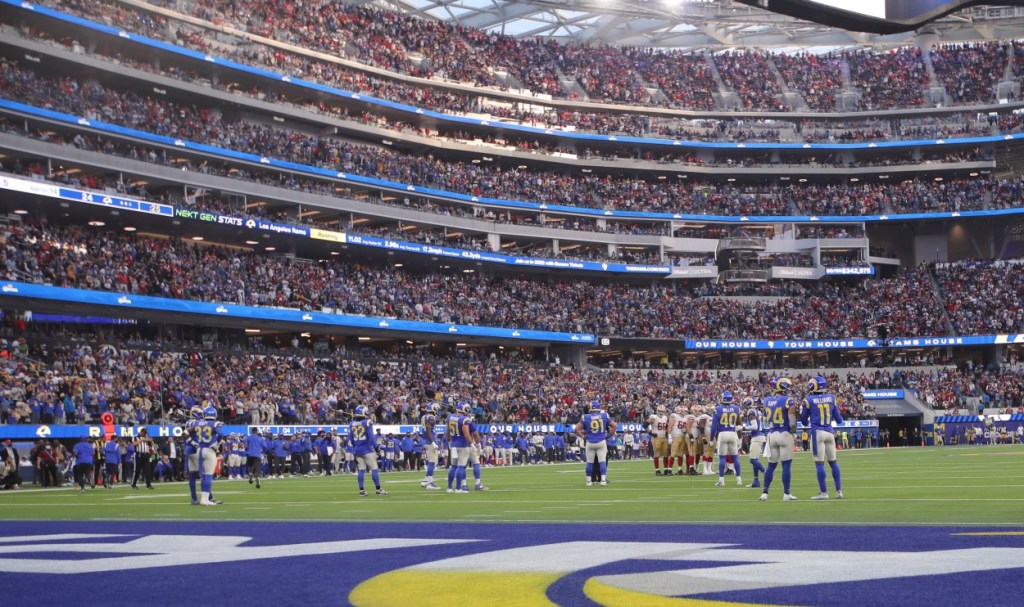 The NFC Championship game on Sunday will see the Los Angeles Rams host the San Francisco 49ers at So-Fi Stadium in LA. This will be the third matchup between the 49ers and Rams this season. Most recently, San Francisco beat Los Angeles in overtime on the last day of the regular season, a win that catapulted the Niners into the playoffs.

That Week 17 game was in Los Angeles and San Francisco 49ers fans flooded So-Fi Stadium with red. So many Niners fans showed up that the Rams lost any semblance of home-field advantage. And there have been all sorts of moves in place for a week to stop that from happening in the NFC Championship Game.

Initially, the Rams announced a policy to void any NFC Championship Game ticket purchases for anyone with a billing address outside of Los Angeles. Their hope was this would keep most of the 49ers fans out. But all of the available tickets were sold to Rams season ticket holders and then the secondary market (StubHub, SeatGeek, etc) was flooded with expensive tickets. Matthew Stafford’s wife, Kelly Stafford, has a VERY EXPENSIVE plan to keep those expensive tickets away from 49ers fans.

Kelly Stafford took to Instagram to share that she was taking things into her own hands. And by that she means she’s opening up her and Matt’s bank account to spend a fortune on tickets. She’s buying up the secondary market and hooking up deserving Rams fans like veterans and first responders.

Just went on Ticketmaster and saw how expensive tickets are getting. I’m going to buy a good amount and give them away. If you are a hard core rams fan, or just a regular rams fan, a veteran, active in the military, a public servant, etc.. email me at staffgiveback@gmail.com and tell me your story with some photos attached! I’ll get back to y’all by tomorrow night!!

Currently, the cheapest NFC Championship Game ticket on TicketMaster is $703 (after fees) and it’s in section 517. There are tons of tickets in VIP sections selling for $3,500 to $6,000. Again, the cheapest ticket is $703. Kelly Stafford has to be spending a legitimate FORTUNE on these tickets.

Kelly posted on her Instagram story that within the first hour of posting she received over 1,000 emails and they were piling up in her inbox by the second.

There are a ton of “love this” comments on Kelly’s Instagram post. Everyone in her sphere seems super stoked that she’s using their considerable fortune to get fans into the game. Matthew Stafford has made $246,506,037 in career earnings just playing in the NFL and not including endorsements. So they can certainly afford to make dreams come true for and.

On another note, Kelly Stafford recently spoke about the rift between Matthew Stafford and Ndamukong Suh on the Buccaneers. They two used to be teammates and on The Morning After with Kelly Stafford, Kelly unloaded on Suh.

Kelly Stafford Unloads On Ndamukong Suh Not Liking Her Husband

She didn’t stop there. Kelly Stafford was feeling heated. This is a rift that goes back years. She continued with:

“Obviously, when I saw that, I was like, ‘Oh F you Suh. Like what is wrong, relax dude, it’s football.’ And I have no idea what just triggered that.

“So then I asked Matthew last night (Sunday) and he was like, ‘honestly, I don’t really know what happened. I didn’t really know who tackled me. But I remember getting put to the ground and someone on me and got him off me to try to get to the next play, and then Suh was in my face telling me he was going to (expletive) me up.’ And I was like (laughing), ‘What? I don’t understand.’ He’s like, ‘who’s gonna understand it, whatever, it doesn’t matter.’

I’m a Bucs fan and I wasn’t very fond of Suh until he was on my team where he has been an outstanding player and teammate to the other Bucs. This idea that players on opposing teams need to get along in the NFL because they’re all part of the same business is odd. I say we let them be enemies.