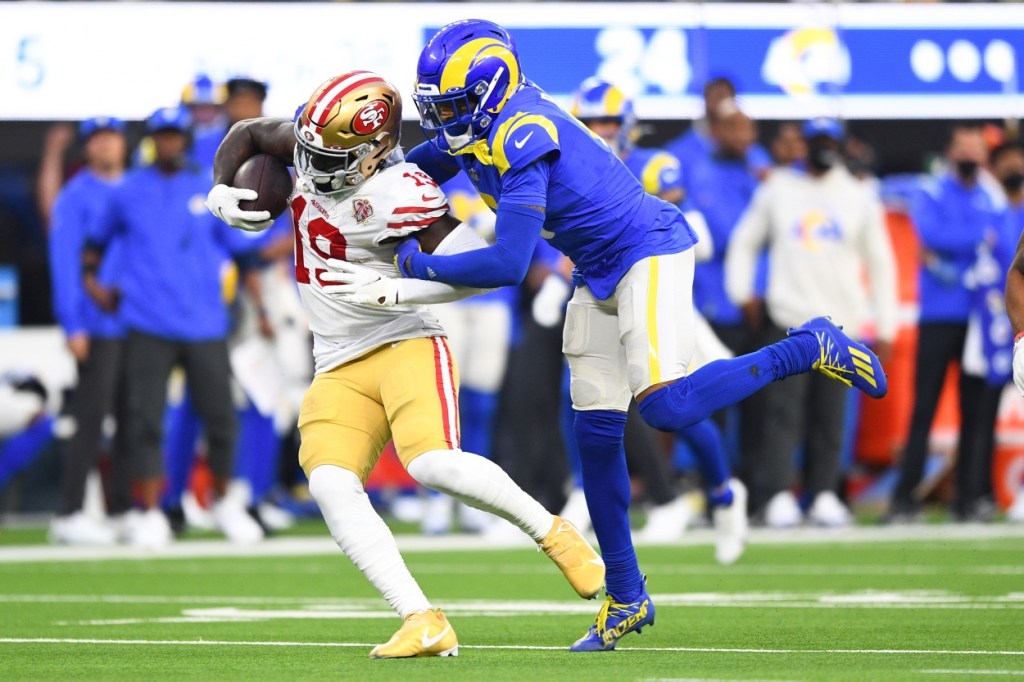 What we saw during the NFL’s Divisional weekend was very unexpected. Home teams were 1-3 across the four games and there was no evidence of home-field advantage anywhere. Even the Chiefs who were the lone home team to win just BARELY beat the Bills after Buffalo never got the ball in overtime.

Their plan worked, temporarily, as season ticket holders purchased up all of the available seats and now it’s on to the secondary market. The tickets sold so quickly that TicketMaster removed their notice by 11am, according to ABC 7 News:

Fans who had previously been attempting to buy tickets received a notice that “Public sales to the game at SoFi Stadium in Inglewood, CA will be restricted to residents of the Greater Los Angeles region,” and, “Residency will be based on credit card billing address at checkout.” A source from the Rams said the tickets are sold out, so that is why that policy is no longer in effect. Tickets that are available for purchase on Ticketmaster are all through verified re-sales.

“The game is sold out. Our Season Ticket members bought up all available tickets during a presale over the weekend, so there is no policy in place,” the Rams public relations team later said in a statement. Ticketmaster released the following statement: “Ticketmaster works on behalf of our clients, the event organizers. Ultimately these decisions lay with them and we act at their direction.”

"Don't sell those tickets!" Rams coach Sean McVay says about this Sunday's NFC championship game vs. the 49ers, when asked what his message would be to fans with the chance to make a big profit off sales.

Just because it temporarily worked it doesn’t mean that 49ers fans are giving up without a fight to get into the NFC Championship Game.

Dear ALL @49ers fans in SoCal or anywhere,

I got a word that Ticketmaster lifted LA’s restrictions if it’s true.

If not, you can get tickets on secondary markets like StubHub, SeatGeek, Gametime, etc

ATTENTION: 49ERS FANS IN LA THE FAITHFUL NEED YOUR HELP! THE RAMS ARE TRYING TO RESTRICT US FROM SHOWING UP SO PLEASE LETS HELP EACHOTHER OUT AND GET TO THE GAME

The Rams and 49ers last met in Los Angeles in Week 18’s conclusion to the regular season. San Francisco just barely beat the Rams, 27-24, and clinched their spot in the playoffs and have now won three games on the road in a row.

There were so many 49ers fans in the stands for that game that LA’s head coach Sean McVay actually acknowledged how unexpected it was. He remarked “It did catch us off guard. There was a lot of red there. That was definitely a surprise.”

The Los Angeles Rams could go even further and ban fans wearing 49ers gear from specific seats or parts of the stadium, it’s happened in hockey many times before (not just in Tampa), but it appears as if it’s now in the hands of the market.

San Francisco 49ers fans can now choose to spend a fortune with ticket resellers for seats and flood the stadium. It’s not the ideal way to get into the game but it’s an option.