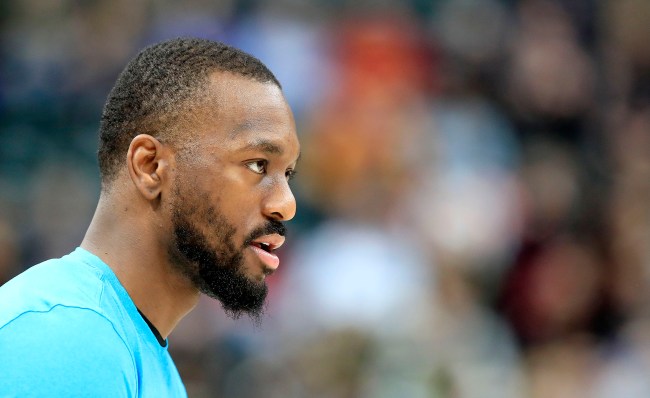 Kemba Walker found out early on what life might be like playing for the GOAT of all GOATs, Michael Jordan. That’s because, in an interview with Sports Illustrated‘s The Big Interview, the former first-round pick talks about his first interaction with the six-time NBA champ — and it came during his pre-draft workout with the Charlotte Hornets back in 2011.

Jordan, who is still as good at talking crap as he was during his playing days — as evidenced by some of his all-time trash-talking moments and, more recently, a reply to a question about impressive stats’ streaks — didn’t seem to mince words when Kemba Walker was working out for MJ’s franchise as a star coming out of UConn. Here’s what the three-time All-Star had to say to SI‘s Chris Mannix about Jordan giving some shade towards his (then future) star.

Chris Mannix: You’ve got the unique experience of playing on a team that’s owned by the greatest of all time. Your first interaction with Michael Jordan was when?

Kemba Walker: My first interaction with MJ was my draft workout here. I remember he was just sitting on the side. I was nervous, but I knew I had to try my best to impress him—I think I did. It was a really fun workout. All I remember was he was talking trash, which he usually does a lot. He was talking trash on the sideline, but it was fun.

Mannix: Talking trash to you how?

Walker: They put two balls on the floor and they were trying to have us palm the basketballs. And as I was going up he said, ‘Man, get out of here, you can’t palm the ball like that.’ I was like, ‘You’re right.’ I didn’t even try.[Laughs] I can’t palm it. But just stuff like that. He’s a good dude. He’s the best, man. Super down to earth. A really good guy to be around.

Mannix: Could you ever imagine as a kid that you would have unfettered access to Michael Jordan?

Walker: No, not at all. Some people ask me (about it). It’s still kind of surreal. Whenever he’s around, he’d just be standing there chilling. Just chilling. And I’m like, ‘That’s MJ.’ And you know, I can text him or call him anytime and he responds right away. That’s a special feeling to have. But like I said, it’s still kind of unreal at times. That’s the greatest player of all time right there. He’s just super down to earth. It’s unbelievable.

There are plenty of “welcome to the NBA” moments — like fetching donuts for veteran teammates or getting chased down and blocked from behind by LeBron James — but Kemba Walker’s involved the GOAT talking mad sh*t to him, so he wins over everyone else. Luckily, none of this seemed to impact Walker too much, because the dude turned out being a stud.