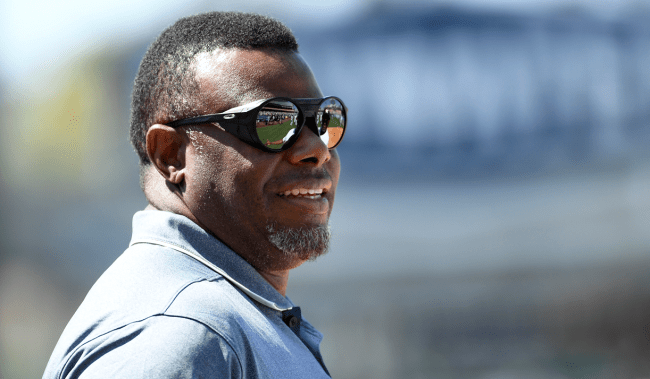 Baseball Hall of Famer Ken Griffey Jr., the sixth highest paid player on the Cincinnati Reds payroll when the season began, was on hand for the 2022 MLB Home Run Derby.

Griffey, the only player in the history of the Home Run Derby to win it three times (1994, 1997, and 1998), was there to see if New York Mets slugger Pete Alonso could match his feat and to present the trophy to this year’s winner of the annual event.

During 21-year-old Seattle Mariners rookie sensation Julio Rodriguez’s first round of the Derby, in which he hit an astounding 32 bombs, Griffey was spotted taking photos using a very large zoom lens on a very professional looking camera.

Ken Griffey Jr. got the meme treatment for taking photos of Julio Rodriguez at the Home Run Derby

Naturally, because the internet’s gonna internet, that moment quickly got turned into a hilarious new meme.

Ken Griffey Jr. digging up dirt on Julio Rodriquez to blackmail him if he tries to outshine him with the greatest HR Derby performance by a Mariner pic.twitter.com/C5GG9H5E8I

Ken Griffey Jr. out here like he was told to bring back pictures of Spider-Man. #HomeRunDerby pic.twitter.com/D8LsK9l3Xa

I need a new picture of photographer Griffey every year for the rest of my life pic.twitter.com/95rHqpvoX0

Julio Rodriguez ended up falling just short of winning the whole thing after hitting another 31 home runs in round two, because in round three J-Rod was outdone by 23-year-old Nationals star Juan Soto 19 home runs to 18. Rodriguez finished the night with 81 home runs to Soto’s 53, but Juan did what he had to do to take home the title.

The Mariners’ future superstar still had a very good time though, writing on Twitter after the event, “What a blast at the #derby! I appreciate the opportunity @MLB. I hope you guys enjoyed!”

“I feel like that was pretty cool that basically the trophy just stayed in our country and if you know that we breathe baseball there,” Rodriguez said after losing to Soto. “Being on this stage and representing our country, that was really special for us. That was basically the coolest thing we talked about.”