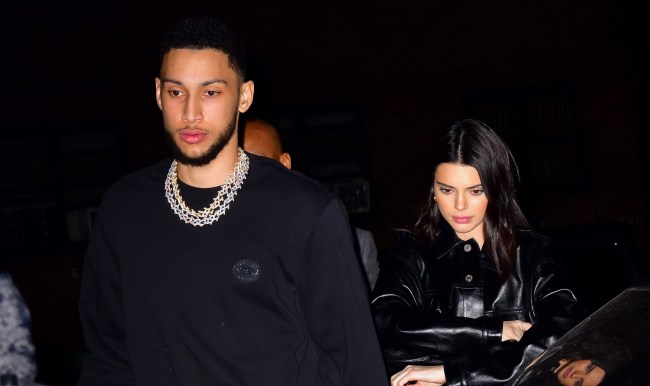 Most recently, Jenner was reported to be possibly dating Kyle Kuzma after the two of them were spotted together on a yacht over the Fourth of July weekend.

LMAO kuzma dated a kardashian for five minutes and Kawhi and PG13 goes to the clippers.

A “source” later claimed “there’s no romantic relationship” between Kuzma and Jenner.

That, however, didn’t stop Ben Simmons’ very vocal sister Olivia from sub-tweeting the hell out of Jenner after she was spotted hanging out with the Lakers forward.

I just wouldn’t ever wanna be known for dating athletes. Like imagine working your way through a league. Not a team a LEAGUE!

I’d rather be crazy than be a hoe #facts

I can’t be controlled Bitch I live under a tree on shade street. Lol F off

Don’t make me start stating facts. Y’all wont like that very much. pic.twitter.com/kMdVxmSls6

Nor did it stop a random Twitter user from posting a photo of five of the NBA players Jenner has supposedly dated, calling them a “playoff team.”

This is a playoff team lmao pic.twitter.com/8OwE17Lpac

That would be a pretty good team. Not sure about playoffs, but they could give definitely win some games.

Jenner somehow saw this random tweet and surprisingly decided to respond writing, “2 out of 5 accurate, thanks.”

Okay, so, which two is she referring to? Has to be Simmons and Griffin, right?

Naturally, people on the internet (including Kuzma’s ex-girlfriend Katya Elise Henry) were more than happy to get involved in the discussion.

You could make it 100% accurate if you try hard enough.

The ones without the jumpers right

Please be the Wizards new GM

I’m ready for that sixth man of year award

Everyone knows the admitted number is always multiplied by 2. 4/5 still a lot.