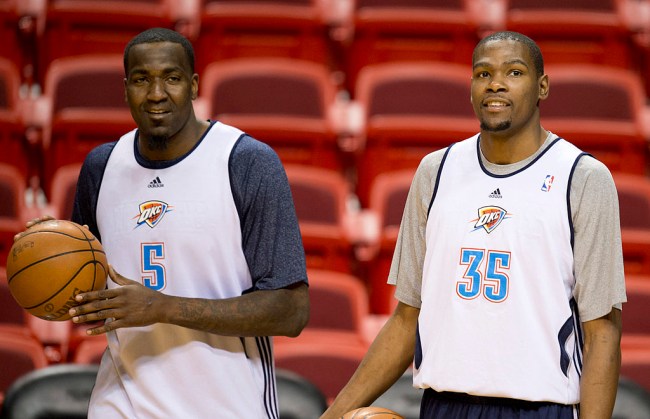 Anytime you hear the news of someone passing away it serves as a reminder about just how random and precious life is. When it’s such a tragic circumstance involving someone as popular around the world like Kobe Bryant, it really drives that message home.

For Kendrick Perkins, it’s clear that the news of Bryant, his daughter and seven others passing away on Sunday served as a reminder for him to not waste time and let the little things go.

Perkins took to Twitter as the news continued to break on Sunday and extended an apology to Kevin Durant telling him he loves him and that he is sorry.

Just wanted to tell you I Love you my brother and whatever I did to hurt you I’m sorry bro and hope you forgive me!!! I love you bro real Talk! @KDTrey5

Just a few weeks ago the two former teammates got into a heated discussion on Twitter after Perkins claimed that Russell Westbrook was the best player to ever play for the Thunder. Durant didn’t agree and called out Perkins for not contributing much back when the two played together.

Yea and our starting center @KendrickPerkins averaged a whopping 2 and 3 during that series. U played hard tho champ lol

Durant hasn’t responded to Perkins’ tweet apologizing, at least not yet.

It’s been an incredibly difficult 24 hours or so since the tragic news and has served as a very real reminder that no time is guaranteed.

While throwing up an apology on Twitter may not have been the ideal move to some for Perkins to pull off, it’s at least a start for the Durant-Perkins beef to at least cool off.