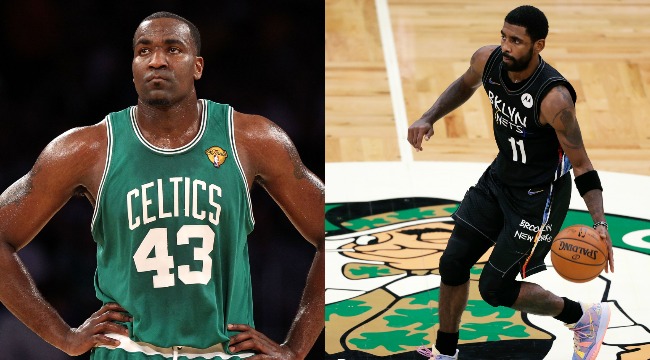 Kyrie Irving is scheduled to return to Boston for the first time with fans in attendance since jetting unceremoniously in 2019, less than one year after Kyrie told a sold-out Celtics crowd that he plans on re-signing with the team “if you guys will have me back.”

This, of course, was four months before he said “I don’t owe anybody sh*t” when asked about free agency. Before he legitimately quit on his team after Game 1 of the Milwaukee series. Before former and current Celtics players claimed he was “hard to play with” and “disrespectful to the city of Boston.” Before moping, pouting, and disengaging with a young team that desperately needed a shepherd. Before ghosting the Celtics in free agency.

And now, as Kyrie is prepared to steamroll through a wounded and anemic Celtics team in his return to the TD Garden, he’s exercised the need to preemptively accuse the near full capacity Boston crowd of racism, as if that’s the primary reason for the abhorrence.

“Hopefully we can just keep it strictly basketball. There’s no belligerence or any racism going on, subtle racism or people yelling s— from the crowd…I’m not the only one who can attest to this, the whole world knows it.”

Kyrie Irving addressed what it's like to play in Boston as an opponent and hopes it will be "strictly basketball" when the Nets travel for Games 3 and 4. https://t.co/c2DCWu372g pic.twitter.com/53aNUZLd8Y

Former Celtics Center Kendrick Perkins, who spent 8 seasons with the Celtics and has been critical of Kyrie’s demeanor in the past, had a much different experience than the dystopia Kyrie’s describing.

“Celtics fans are some of the best fans in the world…I lived there for eight and a half years and, me personally, I never dealt with any type of racism while I was living in Boston…I also came back as an opponent of the Celtics with the Oklahoma City Thunder and Cleveland Cavaliers and still never experienced any racism, and I was always the guy who was all around the town. It’s always extra with [Kyrie]. I don’t know why we’re surprised.'”

“Let me say this, now that I think about it, I haven’t heard of any incidents of racism going on, not in my generation…with any African American athlete that has come into the Garden.”

In his Hall of Fame acceptance speech, Kevin Garnett, who previously claimed Kyrie didn’t have the “cajones” to play in Boston, said that his one regret over his incredible career was not coming to Boston sooner.

Kevin Garnett says he embraced the Boston's "over-the-top" fanbase. He adds, "My only regret in any of this was that I should have came to Boston a little earlier. Other than that, it was magical." pic.twitter.com/krVfqjxyqv

Paul Pierce, who spent 15 seasons with the Celtics, said in 2019 that the perception of the city does not match the reality.

“I think it more has to do with the city, or the weather, or Boston has always been known as a racist city, but people come and it’s not like that anymore,” Pierce said. “That’s just what it is. It’s been known for that. Once they get here and understand what it’s all about, they change their whole opinion.”

When Rajon Rondo was traded from Boston to Dallas in 2014, he tweeted that his love for “loyal and supportive” Celtics fans was “unmatched.”

If Kyrie absorbs any racial slurs in Game 3, he has my total blessing to blast the Celtics fanbase in the post-game presser. But to preemptively call into question the morals of a fanbase he treated like dirt for a full season is as lame as it gets.