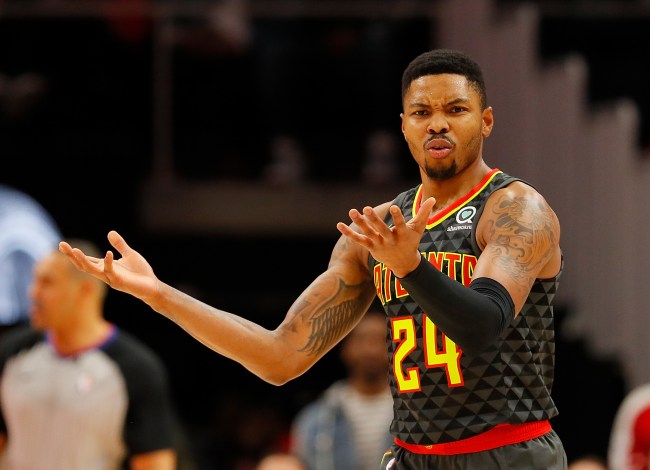 Kent Bazemore of the Atlanta Hawks is a pretty good player, but, as we know, sometimes bad things happen to good people. And, oh boy, did Bazemore get wrecked last night by reigning NBA MVP James Harden, who hit him with that lethal crossover that’s been nearly unstoppable all season long. The result? An instant viral video which showed Kent Bazemore looking completely lost. Take a look below.

Where in the hell was Kent Bazemore going here? Legit, the dude got completely turned around and had his back to Harden as the Rockets star blew by him on his way to the bucket. You almost have to feel sorry for Bazemore being victimized this badly.

While Bazemore may have gotten burned on the play — and by the Internet, who couldn’t help but roast him last night after the video hit the Interwebs — he did something pretty awesome today, releasing an explanation for why he got played so hard. Hilarious move by him, so take a look at what he said.

For my b-ball junkies… couldn’t wait for the next episode of #WinginIt for this one 😂😂😂 pic.twitter.com/5MSNxs7X9H

I’m not so sure about excuse, but, hey, at least Kent Bazemore had fun with the whole thing. Most NBA players have such big egos that they shy away from admitting what we all saw — which was a dude getting crossed up in the worst of ways. When you add in the fact that James Harden ended up with 31 points and Bazemore only had three in the Hawks’ lost, well, it kind of makes the entire game pretty pathetic for the Atlanta player.

There’s a silver lining to all this, of course, and it’s the fact that Kent Bazemore doesn’t have to try and defend James Harden again until next season, because the Hawks don’t play against the Rockets again this year. That has to help the dude sleep a little better at night, because nobody enjoys going up against an assassin like Harden — for reasons shown last night.