Despite Opening Round Loss, Kentucky Fans Still Find A Way To Make Title Game About Themselves 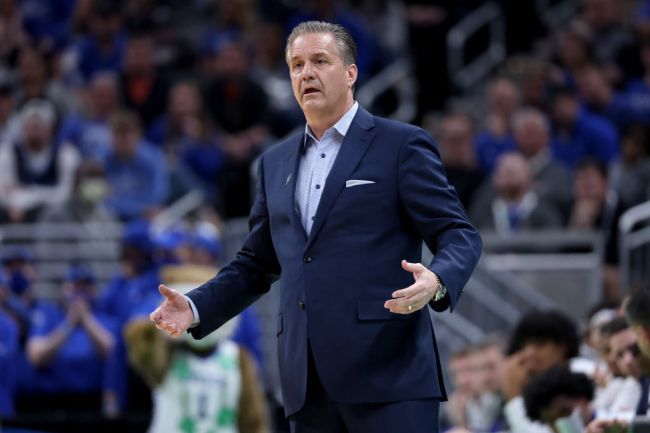 The Final Four provided college basketball viewers with a ton of entertainment.

The Kansas Jayhawks showed their dominance in a 16-point win over Villanova in the first game of action. Bill Self’s group will now play for the fourth NCAA Tournament title in program history.

The nightcap was even more exciting.

North Carolina upset Duke in Coach K’s last game ever. The back-and-forth contest came down to the wire, with the 81-77 defeat sending the Tar Heels to national championship. It also sent Mike Krzyzewski home with a loss to his hated rival, the second time UNC has ruined a Coach K send off as they also took down the Blue Devils in the legendary leader’s final home game, too.

With the national title matchup set, fans are eager to see two of the sport’s most historic programs face off to close out March Madness.

Unfortunately, there’s another blue blood that’s trying to make this championship game all about themselves.

The Kentucky Wildcats were bounced in the opening round of the NCAA Tournament by 15th-seeded Saint Peter’s. That hasn’t stopped fans from trying to convince everyone that their team is still better than the two competing for a national title on Monday.

Following the Kansas and UNC wins, Wildcat fans swarmed to social media to let everyone know that Kentucky beat both of those schools in the regular season. Not that anyone asked.

Kentucky beat North Carolina by 29 on a neutral court.

North Carolina and Kansas, who lost to Kentucky by a combined 47 points, will play for the national championship on Monday night. Totally insane.

Kentucky beat Kansas and North Carolina this year by a combined total of 47-points.

Kentucky beat the two teams in the national championship by a combined 47 points. Even more frustrated now.

Crazy to think Kentucky beat both teams who are playing for the championship by 18+….

Everyone: “What a great game”

Kentucky: “WE HAVE TO MAKE THIS ABOUT US" https://t.co/vSsl2jrpQi

Get ready for a whole bunch of tweets about how Kentucky beat both teams that are in the National Championship game.

I guess it’s their way of coping with that opening round upset. Unfortunately for Kentucky, trophies aren’t handed out in the regular season.