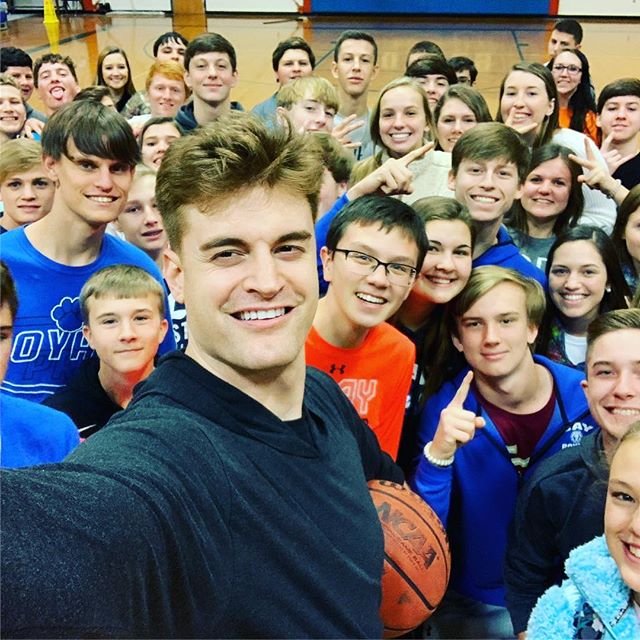 In 2001, when my mid-section was less robust and I had 18 fewer years on my legs and back, I was playing in a Hoop It Up tournament in Raleigh, N.C. My team included a childhood pal, Rich Murray who had played at Kansas State, my buddy Frank Bio who looks just like Gheorghe Muresan, and a dude I met playing pickup ball named Spence.

We didn’t fare all that well, and yet, huge crowds watched each and every one of our games. It wasn’t because of my amazing mustache, remarkable hair nor even my dramatic lack of talent. No, it was because Spence had one arm, and despite that – dude could flat-out ball.

Which brings me to a 28-year-old, 6’11 ginger named Kevin Atlas (Laue). He’s a giant of a man, but that’s not his story. What makes Atlas unique is that he is the first player with only one arm to ever earn a Division I basketball scholarship.

An incredible feat, indeed, and comes with its fair share of fame. But still, that’s not what makes Atlas remarkable. Rather, it’s what he’s doing now that will, in his mind, define him.

Atlas is on a nationwide tour to not just share his personal story – one that will be heard at more than 70 schools this year, and some 300 in the next several years. And while every school receives its fair share of compelling speakers, they are forgotten not long after the door shuts behind them on the way out.

Atlas is on a mission to truly inspire, drive change, and where he differentiates himself is that he is tasking every coach, administrator and student he engages with along the road to take action and support one another through what he calls, the Believe in U” Challenge (#BelieveInYou).

“Our mission is for every student in America to have someone who believes in them,” said Atlas. “We are beginning a coast-to-coast crusade to bring our Believe In Youmessage to campuses across the country because I’ve been at schools where this exists, and it’s beautiful. Young people today need to feel that support and love. I’m so thankful for this opportunity and I know this will make a difference.”

His challenge begins with every student attending a school event he or she may not have gone to before, such as the football team attending the band concert to reciprocate the support they received all season or the band attending a drama performance, or all three cheering loudly at the next tennis match.

Atlas’s mission has found supporters far and wide, which is why Varsity Brands – parent company of BSN SPORTS, the Nation’s largest supplier of team sports equipment and apparel – partnered with him on the campaign and video series. Varsity Brands and its subsidiaries are reach schools on nearly ever high school campus through sports equipment and apparel, cheerleader uniforms or yearbooks and class rings.

“We believe we have a duty and obligation to help Kevin spread his message,” said Adam Blumenfeld, CEO, Varsity Brands. “The Believe In You challenge and Kevin’s tour will come to life through the hard work and coordination of our three divisions, BSN SPORTS, Herff Jones and Varsity Spirit. Our corporate mission is to elevate student experiences and there isn’t a better person to help us achieve this than Kevin, which is why we are so excited about our partnership with him.”

Atlas is on a whirlwind, coast-to-coast tour and in late February he will next visit Paradise High School in Northern California and speak to a community that experienced a devastating fire damage last year.

He is a giant man of ginger on a mission, and Atlas says that if he can deliver just one message – impart just one thought to the thousands upon thousands of young people he will touch in the coming years – it will be a very simple, but essential notion.

“Believe in each other because if not you, then who?”

Honor to speak on behalf of @reputation_com this weekend and to hang with one of my great coaches @joejoefuca. @lakeshowhoops